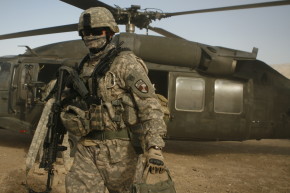 ISIS Mission Creep: A Brief History Of US Forces In Syria
By Shane Dixon Kavanaugh

ISIS Mission Creep: A Brief History Of US Forces In Syria

The White House's announcement that it's deploying U.S. commandos to battle ISIS comes after months of covert operations in Syria

President Obama approved the deployment of up to 50 American special operations forces to northeastern Syria on Friday, where they’re expected to help Syrian rebel forces prepare for a new offensive against the Islamic State. The move is an expansion of U.S. military involvement on the ground and marks the beginning of a new front in its escalating war against ISIS.

However, it’s far from the first time that American forces have set foot onto the Syrian battlefield. Over the last 16 months, the U.S. has conducted a series of covert operations in the country, including nighttime raids and CIA training programs.

Here’s a snapshot of the U.S.’ ongoing mission creep in Syria.