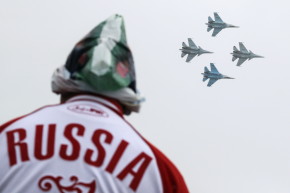 Bang For Its Buck: How Russia Spends Millions A Day Bombing Syria
By Shane Dixon Kavanaugh

Bang For Its Buck: How Russia Spends Millions A Day Bombing Syria

Russia’s air war against rebel and Islamic State targets in Syria costs the Kremlin just over $4 million a day, according to an independent analysis of its military campaign, a figure that’s nearly a third of what the United States says it spends battling ISIS on a daily basis.

IHS Jane’s, a U.K.-based defense and intelligence firm., estimates that Russia’s daily bombing raids, supply runs and on the-the-ground support in Syria hit nearly $120 million during the first four weeks of its military intervention, which began on Sept. 30. The tally includes an estimated $36 million that Moscow spent when it fired more than two dozen cruise missiles from warships stationed in the Caspian sea and into the conflict zone on Oct. 7.

More Putin Makes No Distinction Between Syrian Rebels And ISIS

The IHS analysis, though not exact, offers the first detailed look at the cost and structure of Russia’s campaign in Syria. Moscow has not released figures of its own.

The United States and other nations have accused the Kremlin of escalating Syria’s civil war by entering the conflict. Russia has also provided new momentum to the forces supporting embattled President Bashar Al-Assad, a longtime ally, through hundreds of coordinated airstrikes. The Syrian Observatory for Human Rights, a monitoring group, claims that at least 595 people have been killed in Russian strikes since they began at the end of September. Russia’s war planes have also reportedly bombed hospitals and other civilian targets, an allegation Moscow denies.

Despite the criticism for bombing Syria, Russia’s air campaign remains limited, said Ben Moores, a senior analyst at IHS. “What has Russia been able to achieve so far?” he said. “It’s a relatively small intervention with really quite limited goals.”

By contrast, the United States is now spending nearly $11 million a day in its military campaign against the Islamic State, according to recent Pentagon reports. The total price tag was $4.75 billion through Oct. 15.

Those figures, however, include the cost of fighting in both Iraq and Syria. It remains unclear how much the U.S. spends daily in Syria alone. A Pentagon spokeswoman told Vocativ that a more specific breakdown in cost was unavailable.