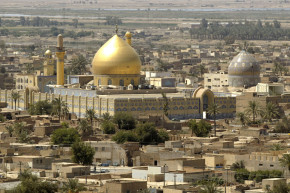 ISIS Taunts Iraqi Shiites By Getting Close To Major Shrine

The latest target in ISIS' crosshairs is the city of Samarra, already an epicenter of Sunni-Shiite tension, and 80 miles outside the capital

ISIS is on the move again, this time its sights set on a city that is home to one of Shiite Islam’s holiest sites, and the trigger for the sectarian killings that erupted in Iraq nearly ten years ago.

Using its technology, Vocativ found official ISIS announcements declaring that its fighters had attacked Iraqi army and Shiite militia posts northwest of Samarra, which is a mere 80 miles north of the capital of Baghdad. ISIS released images reportedly showing suicide bomber operations against Iraqi army outposts ringing the city, along with the weapons its fighters had confiscated.

Samarra, named a UNESCO world heritage site, is also home to al-Askari mosque, the famous golden-domed shrine Shiites revere as the burial place for two of their saints, known as Imams. It is also the site where the 12th Imam, Mohammed al-Mahdi, was disappeared. Shiites believe he remains in hiding until he is meant to return to rid the world of tyranny and restore justice. In 2006 Sunni insurgents blew up the shrine, letting loose a wave of retaliatory killings that escalated into an all-out sectarian war that was only abated once U.S. troops flooded Baghdad neighborhoods and fortified enclaves for the different sects.

ISIS supporters see the golden-domed mosque and its importance to Shiites as another imminent conquest. “The dome of the shrine in Samarra is made of a half ton of pure gold. It will be minted into ISIS dinars”, boasted one supporter online. “After liberating Samarra with God’s will, the Mujaheddin should not hesitate and blow up the big Shiite shrine in it,” wrote another. Others posted maps reportedly showing fighters to be some seven miles from the shrine.

Since Iraq’s bloody civil war the shrine was attacked a second time in 2007. In June last year ISIS fighters managed to fire mortars on the Shrine, but only hit the outer perimeter.

Translation: The dome of the shrine in Samarra is made of a half ton of pure gold. It will be minted into ISIS dinars.

There’s been no official word on ISIS activity near Samarra. The group recently suffered a major setback near the northern city of Kirkuk, after a Kurdish military operation, backed by U.S. troops, carried out the rescue of some 70 hostages. One American commando and several ISIS fighters were killed in the raid on Hawija prison.