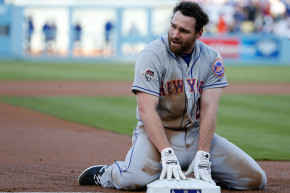 The Mets’ Days Off Won’t Influence The World Series
By Joshua A. Krisch

The Mets’ Days Off Won’t Influence The World Series

The New York Mets should certainly be well-rested for the 2015 MLB World Series. When the series kicks off on October 27, the Mets will have had a full five days to recuperate between the playoffs and the championship.

More Everyone Thinks Their Playoff Baseball Team Is The Underdog

Pundits are still trying to figure out how the five day wait will affect the Mets, and Vocativ has the answer: it won’t, for better or for worse. Overall, the data suggest that teams tend to wait an average of 4.5 days between their last playoff game and the first game of the World Series. The Met’s five days of downtime, then, isn’t exactly new to Major League Baseball.

In fact, it’s pretty standard for teams to take about five days off between the playoffs and the World Series. Not that it matters. Statistics going back to 1995 suggest that the amount of time a team rests has nothing to do with whether they win or lose on game day:

Historically, however, even when teams wait more or less time than the average, it doesn’t seem to have made any difference. The Phillies, for instance, waited seven days before competing in the 2008 World Series and won, and then waited seven days again before the 2009 World Series, and lost.

The Mets have a lot going for them this year and, coming out of a sweeping victory against the Cubs on Wednesday night, Mets pitcher Noah Snydergaard told press that he is 100 percent sure his team will win the World Series. And they might. But it won’t be because of their five day break.