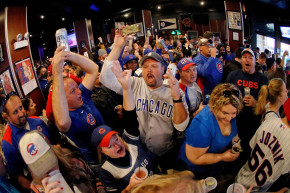 Everyone Thinks Their Playoff Baseball Team Is The Underdog

It's a fun narrative, but not every squad can play the role of unlikely victor — at least not anymore

The MLB postseason is down to four franchises desperately looking to end lengthy World Series droughts. And if Twitter is any indication, the anticipation of a history-making run has all of their respective fan bases thinking their squad fulfills the role of a captivating underdog.

A Vocativ analysis pulled in the sentiment around the postseason hashtags utilized on social media by each distinct fan base and shows over 300 tweets this weekend alone from baseball fans calling their team the “underdog” or “underdogs” of the playoffs.

Love how everyone continues to still bash the Mets, the Mets are the definition of the underdog team #LGM

Harvey is looking good. But we like being underdogs! #FlyTheW @Cubs #Cubsnation

Not worried one but, we will get them tomorrow #underdogs #ComeTogether @BlueJays

While four franchises try to free their cities of decades of baseball heartbreak, not all of them fulfill the role of a true underdog — at least when you look at the odds going into the season. Interestingly enough, the Chicago Cubs, whose last championship precedes World War I, came into the year as the sixth best team in the league, according to Las Vegas oddsmakers. We looked toward Vegas bookies, rather than concrete stats such as win totals, for the best objective measure of team expectations.

Here were the preseason World Series odds of the four remaining teams (Could this be the Cubs’ year?!):

With the Royals and Mets having two-game advantages in the conference series, however,  the odds look drastically different:

Down two games to none, the Cubs have a lot of work to do if they want to shed the title of the most cursed team in baseball. But win or lose, the favorites-turned-underdogs should stay competitive for years to come thanks to a young team built through investment in the minor leagues.