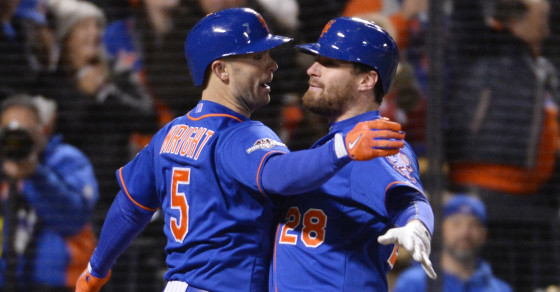 These Baseball Teams Have Waited A Combined Three Lifetimes To Win

107 years after their last championship, will the Cubs "fly the W?"

The four teams still in contention this year’s World Series haven’t won in the Major League Baseball championship in a combined 188 years.

The Chicago Cubs, New York Mets, Kansas City Royals, and Toronto Blue Jays are midway through the championship series that will decide who battles it out for the Commissioner’s Trophy next week.

The biggest dark horse among the underdogs in the MLB playoffs is the Cubs. They haven’t won the World Series since 1908, and were deemed such unlikely winners that the famous “Back To The Future: Part II” scene featuring a news report announcing that the Cubs had won drew laughs in movie theaters in 1989.

The Royals are winning this round of the playoffs but have the second-longest losing streak behind the Cubs, going 30 years without a World Series win despite reaching the finals last year. The Mets fare only marginally better, counting 29 title-free years, while the Blue Jays haven’t lifted the trophy since 1993, 22 years ago.