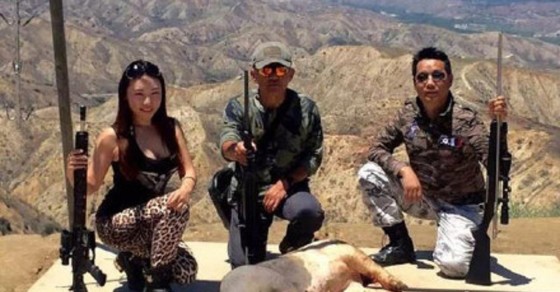 Wealthy Chinese visitors are paying thousands of dollars to take fishing tours and hunt wild boars in the U.S., according to Chinese media reports and images posted to a major social media platform.

The excursions can include transportation via private planes to destinations such as San Francisco and Las Vegas. One tour, offering a wild boar helicopter hunt, costs between $7,000 to $8,000 a pop, according to a local news media report. But some aren’t shy about doling out the cash: A particularly enthusiastic customer bought a helicopter used for a rendezvous at a cost of more than 4.7 million yuan — around $740,000, a U.S.-based Chinese language paper said.

Pictures showing people allegedly participating in the luxury trips have appeared on the Chinese social media website Weibo since mid-October, although it is unclear when and where exactly the images were taken.

The response to the pictures varied, with one Weibo user asking: “Sons and daughters of government officials?” Another Weibo user was shocked: “They have so much money.”

The apparent interest in taking hunting and fishing trips runs parallel to a rise in the number of Chinese tourists visiting the U.S. In four years from now, 3.1 million visitors from China are expected to visit the country — a 172 percent increase from two years ago, according to Business Insider.