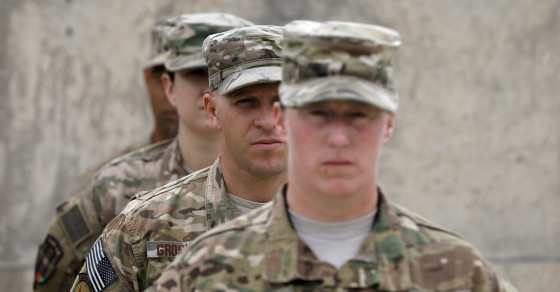 Obama’s Afghanistan War Is Still Not Over
By Jamie Tarabay

Obama’s Afghanistan War Is Still Not Over

America’s war in Afghanistan will continue for longer than President Obama had previously promised, with thousands of U.S. troops staying on the ground beyond his presidency.

“As you are well aware, I do not support the idea of endless war, and I have repeatedly argued against marching into open-ended military conflicts that do not serve our core security interests,” Obama told reporters at the White House, flanked by Defense Secretary Ashton Carter and Vice President Joe Biden.

“Yet given what’s at stake in Afghanistan, and the opportunity for a stable and committed ally that can partner with us in preventing the emergence of future threats, and the fact that we have an international coalition, I am firmly convinced that we should make this extra effort,” he said.

More The War In Afghanistan: By The Numbers

Existing challenges on the ground, the recent temporary seizure of the city of Kunduz by an increasingly resurgent Taliban, and the struggles by the Afghan security forces to perform, have contributed to Obama’s decision to keep troops in place longer than he’d previously intended.

He also said that number might change again, if conditions on the ground do not improve in time.