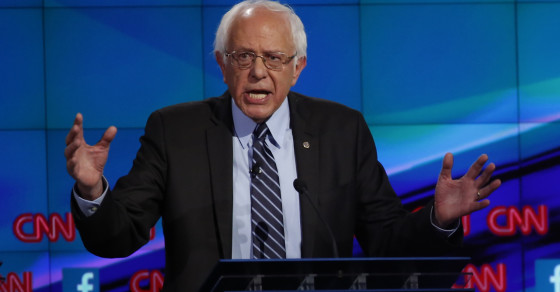 Is Reddit Running Away From Bernie Sanders?
By Joshua A. Krisch

Redditors are a fickle bunch, and when Bernie Sanders bombed the debate, they were quick to turn on The Bern

Reddit loves Bernie Sanders. It’s where he found an army of coding volunteers, and a source of organic support for an unlikely internet hero. Take /r/SandersForPresident, for instance, where upwards of 118,000 subscribers and nearly 15,000 active users spent the evening cheering on the Bern—or, rather, groaning and backing away slowly from the senator from Vermont who looked so promising until he stepped on the debate floor. Sanders arguably bombed tonight on some of the key issues, from gun control to foreign policy, and Redditors, never a group to stay quiet, howled their disappointment in the internet’s favorite socialist curmudgeon.

Here are some of the top debate comments from Reddit:

On Whether The Bern Is A Capitalist

CNN’s moderator Anderson Cooper asked The Bern what should have been a straightforward question: “You don’t consider yourself a capitalist?”. Sanders stumbled. And Reddit noticed.

Then the conversation shifted to gun control, one of Bernie Sanders’ weakest points in his campaign. Sanders, once again, tripped over himself (although he did gleefully mention his D- rating from the NRA) and Reddit erupted in groans:

Cooper moved on to Russia and foreign policy and, once again, Bernie Sanders appeared unprepared. Then, when Cooper called on Sanders to respond to Jim Webb’s position on Russia, Sanders was caught off guard and spat out, “Putin will regret what he’s doing”. Which made sense to no-one.

The Rest Of The Debate

Throughout the night, Sanders regained his footing and Reddit cautiously returned to their hero. But the senator was clearly shaken and, every time he stumbled from that point onward, Reddit erupted in criticism.