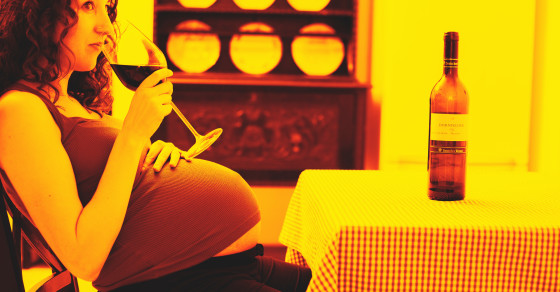 Just when it seemed safe for a pregnant woman to occasionally kick up her swollen feet and have a relaxing glass of wine, a pair of experts has arrived to snatch that Sauv Blanc right out of her hands. They say “the only ethical advice that can be given is abstinence from alcohol in pregnancy.” That’s right, not a drop. It’s just the latest argument in an ongoing and highly contentious debate on the topic—and it’s making headlines in the UK.

Any expert will tell you that binge drinking during pregnancy is a complete no-no—but what about light drinking? That’s an argument still being hashed out in scientific journals and the media on a regular basis. Some experts suggest that no amount of alcohol is safe for pregnant women to drink, while others argue that an occasional glass of wine is fine.

In a new journal article in The BMJ, Mary Mather, a retired pediatrician, and Kate Wiles, a doctoral research fellow in obstetric medicine at Guys and St Thomas NHS Trust, argue that women are getting dangerous and contradictory advice that allows light drinking during pregnancy.  “Alcohol is not essential to the health or wellbeing of a pregnant woman and is known to be [harmful] to her baby,” they write. “Alcohol is not a drug that would ever be ‘prescribed’ in pregnancy, and it is not a drug that should ever be advised.”

They point to nearly 4,000 papers showing that alcohol can be harmful to fetal development—this can include fetal alcohol syndrome, low birth weight and a range of developmental abnormalities. Referring to a recent British study that found no evidence that light drinking during pregnancy causes harm to children, the authors write, “Absence of evidence does not equate to evidence of absence of harm.” They conclude, “Pregnant women must know that there is no threshold of alcohol consumption that is certain to be safe.”

The U.K.’s Department of Health currently advises that the safest approach is for pregnant women to avoid alcohol altogether, but adds that if she chooses to drink, it’s best to stick to two units of alcohol a week (the equivalent of “one or two small glasses of wine”). The Royal College of Obstetricians and Gynaecologists similarly warns against first-trimester boozing, but says that “drinking small amounts of alcohol”—defined as one to four units a week—”after this time does not appear to be harmful for the unborn baby.” (In the U.S., the Centers for Disease Control and Prevention says that there is “no known safe amount of alcohol use during pregnancy.”)

Mather and Wiles argue that these guidelines are confusing. “Few pregnant woman or professionals understand the concept of a ‘unit’ of alcohol,” they say. “Many pregnant women continue drinking in pregnancy to a level that puts their babies at risk.” For evidence, they point to a recent U.K. study finding that the proportion of women drinking alcohol during pregnancy was 79 percent and 63 percent during the first and second trimesters, respectively. In the U.S., the numbers are much lower: the CDC recently reported that 10 percent of pregnant woman have at least one drink a month, and 3 percent binge drink.

True to the contentious nature of this ongoing debate, Mather and Wiles do not get the final word. Their argument is countered by Patrick O’Brien, a senior lecturer in obstetrics and gynaecology at University College London Hospital, who acknowledges that experts have “produced a raft of conflicting guidance for women on this subject.” But he argues that this is the fault of those experts, not pregnant women. “The solution is not to abrogate our responsibility by advising, ‘We’ve confused you, so just abstain: it’s safer,'” he says.

O’Brien believes that moms-to-be are fully capable of evaluating the potential risks and making their own decisions. “Women are intelligent and autonomous,” he writes. “If they perceive that we have been making value judgements on their behalf, or professing certainty where none exists, we are certain to lose their trust.”