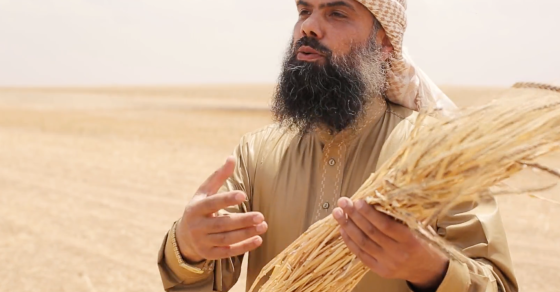 The Islamic State profits more from pilfered cows and other items fleeced from local inhabitants than it does from looted artifacts and the vast oil reserves under its control, newly-leaked financial records from an ISIS-controlled province show.

The documents, the first of their kind to become public, show that as much as ISIS has made from the sale of stolen antiquities and crude oil reserves, those numbers are substantially lower than previously reported estimates. The revelation may undercut the focus among U.S. counter-terrorism officials who prioritize targeting these areas as ways to quell ISIS’ funding.

“I think the popular perception is that IS finances are primarily ruled by oil and antiquities,” said Aymenn Jawad Al-Tamimi, a fellow at the Middle East Forum who exclusively obtained the documents.  “What I’d say is that they’re a portion, but by no means a majority or plurality.” ISIS is also referred to as ISIL and the Islamic State.

ISIS’ oil-rich Deir ez-Zor province brought in a total of $8.4 million between December 23, 2014 and January 22, 2015, according to the documents, which Tamimi first published on the blog Jihadology this week. But crude and gas accounted for about $2.3 million, or 28 percent, of the total haul, which averages to about $76,600 a day. Analysts have previously estimated that ISIS earns anywhere between $1 million and $3 million a day from oil. While Deir ze-Zor is just one of 19 provinces controlled by ISIS, it remains the group’s leading oil producer.

Money generated from stolen antiquities is not itemized in these records but likely constitutes a small portion of the $2 million collected in taxes, said Tamimi, an Islamic State expert who has reviewed other official ISIS finance reports. The militant group collects most of its taxes on water, sanitation and other municipal services, he said.

Roughly $3.8 million, or nearly half of all reported revenue, came from goods ISIS confiscated from people living within the province. In just one month, militants in Deir ez-Zor seized 79 houses, 144 trucks, 1,600 cases of cigarettes, 50 cows, and 1,920 sheep, among other items, according to records. Overall, taxes and confiscations made up 70 percent of ISIS revenue in the province.

“Extortion would be the concise and sensible way of putting it,” Tamimi said.

The findings present a challenge to U.S. counterterrorism officials, who say that crippling ISIS’ financial network is central to ultimately defeating the terror group. While officials have admitted there is no “silver bullet” to draining ISIS coffers overnight, they have focused largely on targeting the group’s oil revenues and stopping the sale of looted artifacts.

A spokeswoman for the Treasury’s Terrorism and Financial Intelligence division, which targets illicit finance networks, did not respond to Vocativ’s request for comment.

Tamimi said that absent a greater military intervention, there is little the U.S. and its allies can do to disrupt the heart of ISIS’ revenue stream.

“If a majority of their money is coming from extortion, then logically it follows you just have to destroy that existing state-like structure,” he said. “But that’s impossible because we don’t have sufficient ground forces to shut off IS from the outside world.”