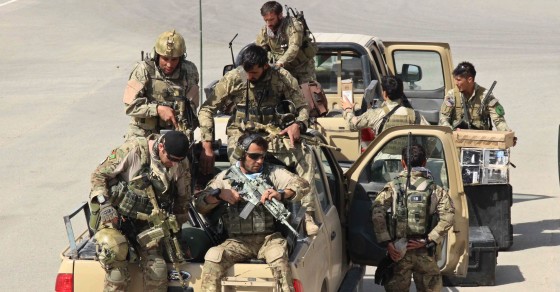 U.S. Spent Nearly $100B On Foreigners To Fight Terrorists
By Shane Dixon Kavanaugh

U.S. Spent Nearly $100B On Foreigners To Fight Terrorists

Despite the enormous tab, ISIS, al-Qaeda and the Taliban are still running amok in the Middle East and Africa

To combat Islamic militants the White House says threaten national interests, the U.S. has spent nearly $100 billion to arm and train foreign militaries across the Middle East, North Africa and South Asia, an analysis by Vocativ shows. And nearly all of them are reeling from setbacks that threaten to undermine what’s become a core component of American foreign policy in these regions.

U.S. programs funding foreign fighters began flourishing in the years after 9/11 and were later bolstered by President Obama, who prefers doing this instead of deploying American troops into troubled areas. Now central to how the White House combats insurgencies in these regions, this strategy appears to be on the verge of unraveling. The Taliban toppled American-trained forces in Afghanistan last week to capture Kunduz, the country’s fifth-largest city. The fight to control it continues. U.S.-funded fighters in Iraq and Syria appear unable or unwilling to take on ISIS. Meanwhile, al-Qaeda-affiliated terrorists are virtually unchallenged in places like Yemen, Somalia and northwest Africa.

“Our track record at building security forces over the past 15 years is miserable,” said Karl W. Eikenberry, a former military commander and United States ambassador in Afghanistan, recently told the New York Times.

Here’s a snapshot of that record.