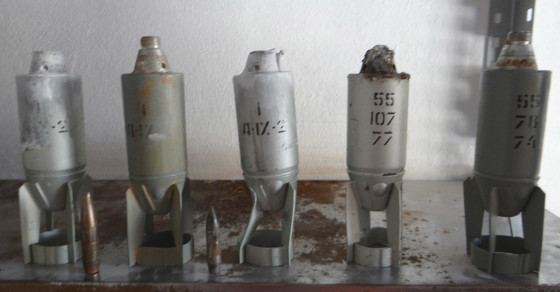 Syrian rescue workers and activists are claiming the Russian Air Force is using cluster bombs, dangerous weapons that can wound and even kill civilians by scattering hundreds of unpredictable submunitions.

Russia is “using cluster bombs that can explode even a quarter of an hour after they fall,” the group cautioned in a statement published on the main Syrian opposition group’s Facebook page. Human Rights Watch has also said the weapons are generally a threat to civilians because they randomly disperse bomblets or submunitions over large areas.

A well-known group of activists in Aleppo published a video they claim shows cluster bombs falling on the Syrian town of Kafar Halab, near where the activists are based. Mohammed Mondass, another activist, similarly declared that Russians are using the dangerous munitions.

The videos could not be independently verified. But they seem to be supported by at least one video Russia’s ministry of defense posted online. It appears to show cluster bombs peppering the ground.

More Putin’s Airstrikes Are Missing The Mark In Fighting ISIS

The Cluster Munition Coalition, an international effort working to combat the use of cluster munitions, urged Russia not to use bombs, although didn’t say whether or not the country is actually dropping them. “These weapons have been banned because they are indiscriminate and unreliable, causing major humanitarian problems and risks to civilians,” Megan Burke, director of Cluster Munition Coalition, said in a statement on October 1. “The people of Syria have already suffered enough.”

The coalition noted that Russia has not signed an international treaty against the explosives: the Convention on Cluster Munitions. It has, however, voted in support of several UN Security Council resolutions that were concerned about cluster munition use, the campaign noted.