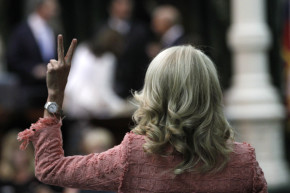 Women seeking an abortion in some parts of Texas now have to wait up to 20 days on average for an appointment, thanks in part to a restrictive law that has forced a number of clinics in the state to close. On Friday, the Supreme Court announced it would hear a challenge to that law, in the highest court’s first major abortion rights case since 2007.

If the Supreme Court allows the law, called HB2, to go into full effect, the state will be left with only about 10 abortion clinics—to serve a population of 5.4 million reproductive-aged women. Wait times will increase even further, and the number of second trimester abortions performed in Texas could nearly double, according to a new research brief from the Texas Policy Evaluation Project (TxPEP).

HB2, which passed in 2013, bans abortions after 20 weeks post-fertilization, limits the use of medication abortion and requires that physicians performing abortions have admitting privileges at a nearby hospital. It also contains a rule forcing abortion facilities to meet the standards of an ambulatory surgical center; that rule has yet to go into effect. This new research from TxPEP, a group of experts evaluating the impact of measures relating to reproductive health in Texas, shows that the state of women’s reproductive healthcare in the state looks dire even without that additional requirement.

The number of facilities providing abortions in Texas has fallen by more than 50 percent, going from 41 to 18, since debate around HB2 began in early 2013, TxPEP found. And the law could cut that number in half again.

The researchers defined the wait time as the period between a call being made to a clinic and the first available appointment for a consultation. Texas requires women to wait 24 hours after that consultation appointment before undergoing an abortion, so the actual wait time to have an abortion is at least a day longer than reflected in the TxPEP numbers.

If the ambulatory surgical center requirements go into effect, forcing even more clinics to close, wait times will increase again, and the proportion of abortions performed in the second trimester will also go up, the TxPEP researchers say. If the average wait time increased to 20 days in all cities except San Antonio, for example, they estimate that the number of second trimester abortions in Texas would nearly double, from 6,600 in 2013 to almost 12,400.

These later abortions are more expensive, as Vocativ has previously reported, and potentially more dangerous as well.

This article was originally published on October 5, 2015 and updated on November 13 to reflect the news of the Supreme Court’s decision to hear a challenge to Texas’ abortion law.