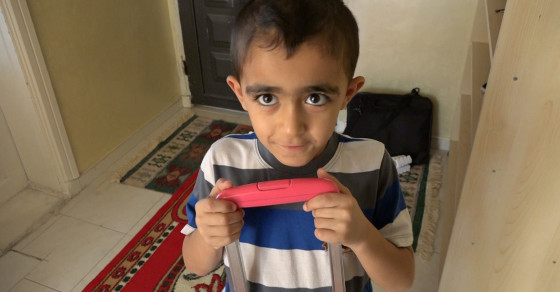 These Traumatized Syrian Orphans Are Getting A New Start

Odai is a 7-year-old Syrian orphan whose father was beaten and shot by soldiers from President Bashar al-Assad’s regime. Odai is one of about 60 orphans from Syria who are being cared for at the Dar Al-Salam Orphanage in Gaziantep, Turkey.

Like Odai, many of the children are in desperate need of psychological support because of the death and destruction they have witnessed. Mothanna Al-Hajji, the orphanage’s psychologist told Vocativ most of the children suffer from Post Traumatic Stress Disorder. Their trauma is evident in the art they create which are dominated by violent images of war.

More than 300,000 people have died since the Syrian conflict began four years ago. According to Save the Children, more than 5 million children need some sort of assistance including schooling. Manal Fares, the head teacher at the oprhanage, told Vocativ that many of the children have been out of school for so long, they have started to forget the Arabic letters. Before the war started, 95 percent of children attended school. Today only 20 percent of kids in Syria are able to attend. In the worst-hit areas, that number drops to 6 percent.

Manar Qara Damour, the orphanage’s administrator, says she hopes to make the children in her care independent so they can make new lives for themselves once they are old enough to re-enter the world. Seven-year old Odai already knows what he wants to be. “An architect,” he says, “so I can rebuild Syria.”