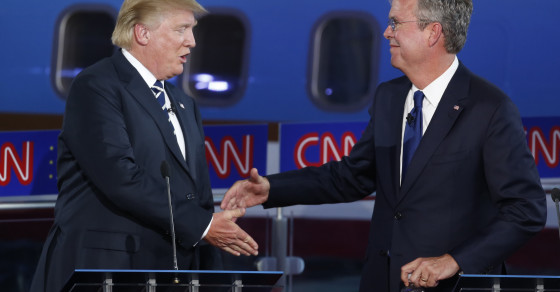 The Smartest Republicans Know How To Name-Drop
By Joshua A. Krisch

The Smartest Republicans Know How To Name-Drop

During Wednesday night's CNN debate, Republican candidates mentioned each other a LOT. Here's why that wasn't necessarily a great idea

Republican candidates love to name-drop whenever possible, and Wednesday night’s Republican primary debate was no exception. Trump mentioned Bush nearly 20 times; Bush returned the favor on at least 12 occasions. Top table newcomer Fiorina joined the fray and mentioned Trump no less than 10 times, while Chris Christie dealt shout-outs throughout the evening, calling Trump, Carson, Paul and Fiorina all by name a handful of times throughout the evening.

Experts say mentioning your opponent by name is not necessarily a good idea, especially on a crowded debate floor where every second of camera time counts. “Candidates don’t really like to refer to each other by name,” says Aaron Kall, Director of Debate at University of Michigan. “It’s almost like giving free publicity to the opponents when they do that.”

By the debate rules, any time you name-check an opponent, they have the right to respond, giving them even more airtime.

To that effect, Carson may have played the smartest game among the frontrunners. Throughout the debate, Vocativ’s exclusive analysis shows that Carson barely called out any candidate by name.

On the other hand, Kall says, if you’re going to name drop, the best debate strategy is to pick somebody who already gets a lot of press. “Name recognition is important,” he says. “You don’t want to mention a less popular opponent’s name and add to their notoriety.” On that front, Bush, Fiorina and Walker played the smartest game. They each mentioned Trump several times and more or less avoided dropping anyone else’s names.

In general, Kall says, the best strategy is to avoid mentioning your opponent’s name at all—and he notes that many candidates have found creative ways to pull that off. “They will call them ‘my opponent,’ or mention an issue they touched on earlier. They will tie an issue to someone without actually saying the person’s name.” But even when a candidate is forced to drop a name, Kall has some general advice for getting the debate back on track.

“You can attack an opponent, but you want to always bring it back to yourself,” he says. “You want to showcase yourself in the most positive light. But also, you want to engage, not just attack.”