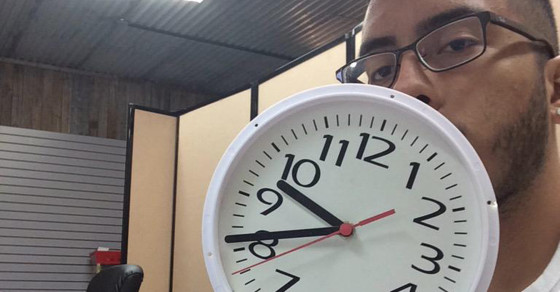 Ahmed Mohamed brought a clock to school, but his teachers thought he'd built a bomb

High schoolers have taken to the Internet to rally around a 14-year-old Texas boy who was arrested for bringing to school a homemade clock that teachers believed was a bomb.

Students tweeted their plans to bring their own clocks to school and shared on Twitter images of giant timepieces strapped to their backpacks to support Ahmed Mohamed, a freshman from Dallas, who was arrested on Monday after he brought a clock he made from a kit to school. During the sixth period, the principal at MacArthur High School in Irving arrived in Ahmed’s classroom with a police officer, who arrested the boy.

Ahmed was a member of the robotics club at his middle school and wanted to show his new teachers at MacArthur High School what he could do, the Dallas Morning News reported late Tuesday.

By early Wednesday morning the hashtag #IStandWithAhmed had begun trending on Twitter and high schoolers, some of whom are believed to be local kids, claimed they were bringing clocks to school in protest of Ahmed’s arrest, and asked others to do the same.

MacArthur High School principal Daniel Cummings defending his decision to report Ahmed to police, telling parents in a letter: “While we do not have any threats to our school community, we want you to be aware that the Irving Police Department responded to a suspicious-looking item on campus yesterday. Please rest assured that we will always take necessary steps to keep our school as safe as possible.”

Vocativ reached out to Adafruit, the New York-based company which sells the clock making kits, but they had not responded at publication time.

I brought my clock to work #IStandWithAhmed pic.twitter.com/AhoS1g0ZW1

Everybody bring a clock and leave it in front of Mr. Cummings room tomorrow! #IStandWithAhmed

We should all bring clocks to school. And by clocks, I really do simply mean a clock, by the way.

Please don't forget to bring a clock to school today! Let people know exactly why you brought it! #IStandWithAhmed