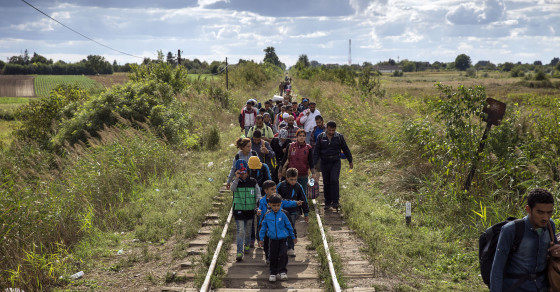 Americans Don’t Know Why Migrants Are Fleeing To Europe

The world knows that migrants are trying against long odds to get to Europe, but not everybody knows why

Most westerners are still wondering why thousands of migrants are fleeing the Middle East, and risking their lives in the process. Germans and Italians are asking what they can do to help.

In the U.S. and Canada, the most Googled question regarding the migrant crisis since September 3 was “Why are people migrating to Europe?” Even people in the U.K., which has agreed to admit 20,000 Syrian migrants by 2020, weren’t certain why Syrians, Iraqis and others in the Middle East are coming. The most asked question there was “Why do migrants come to Europe?”

People in the countries currently taking in the largest number of migrants are less concerned with why the crisis is happening, and instead want to find out how they can help. Residents in Germany, which pledged Monday to spend $6.6 billion to support 800,000 migrants due to arrive by the end of the year, are searching “How to help with Syrian migrants in Berlin” while in Italy, which had taken in almost 115,000 by September 1, people were similarly searching “How to respond to immigrants in 2015.”

The French were most concerned with the sheer numbers, with their top question being “Why are there so many migrants?” but their second question is about how they can help, according to Google Trends data.

Search interest in the crisis was already trending upwards last week, but a viral photo of a drowned three-year-old Syrian boy lying face-down on a beach on the Turkish coast published on September 2 appears have led to a spike in interest in the days that followed, according to Google Trends data for the term “refugees.”

Search Interest In "Refugees" Since August 28