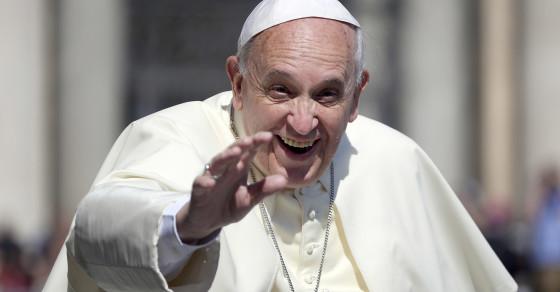 Pope Francis said priests should have the ability to forgive abortion, which brings him more in line with American Catholic views on abortion

Pope Francis’ new willingness to forgive women who get abortions brings him more in line not only with the way American Catholics view the issue but also with U.S. public opinion in general.

Pope Francis’ call for forgiveness on Tuesday for women who have a “contrite heart” allows a loophole for Catholics who have committed a sin that the church considers worthy of excommunication. It’s a loophole that American Catholics—and Americans in general—have said they support. In a 2013 Quinnipiac poll, the largest number of U.S. Catholics (36 percent) said that abortion should be legal in most cases. A similar percentage of American adults (34 percent) agreed with that.

The new statement does not condone abortion, said the Rev. Thomas Rosica, an English language spokesman for the Vatican. Rather, it emphasizes the church’s role in forgiving people for the grave sin of abortion. “That people come to confession today to confess abortion and other grave sins is cause for us in the Church to thank God and to put into practice the mission of the good and merciful shepherd who came to seek out those who were lost,” he said. According to the pope’s directive, these new powers of forgiveness discretion becomes an option during the Jubilee Year of Mercy, which starts Dec. 8.

Some theological experts don’t think Pope Francis’ statement will lead to much change in terms of religious stigma towards abortion, especially since he is not the first pope to suggest seeking forgiveness for abortion. Pope John Paul II said to women in his 1995 encyclical on human life: “If you have not already done so, give yourselves over with humility and trust to repentance. The Father of mercies is ready to give you his forgiveness and his peace in the Sacrament of Reconciliation,” Charles Camosy of Fordham University told The Washington Post.

Abortion Views Of Catholics Vs. All Adults In U.S.