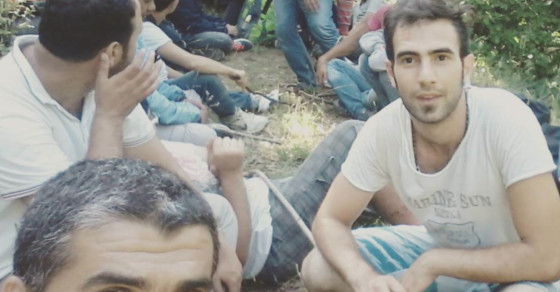 Maziad Aloush, a former school teacher fleeing the Syrian war, led his band of refugees through five countries—across the Mediterranean sea and through forests and around mountains—before they eventually disbanded near the border of Austria and Germany. Like so many of the hundreds of thousands of refugees pouring into Europe to escape war and deprivation, he documented his journey in real-time on Instagram.

His 22-person group, all Syrians, traveled from Turkey to Greece, then up through the Macedonia and Serbia, then crossed into Hungary and then Austria. Their path, known as the West Balkan route, has recently become the most common path for refugees escaping conflict in the Middle East and North Africa on their way to more prosperous countries in the European Union.

In several posts on the photograph-sharing app, Maziad showed a different side of the arduous journey than what Western audiences are usually exposed to. A group of young men, who could easily be mistaken for hikers on a particularly difficult trail – tired but full of life – pose for photos that pepper Maziad’s Instagram feed. And though it is true that refugees and migrants often face life-threatening deprivation, the images are a stark contrast to photographs typically depicted in the media, which often show them in distress, or living in poverty.

Smartphones are a staple in this migration, as they allow migrants to communicate with international agencies, according to a recent New York Times report. The Office of the United Nations High Commissioner for Refugees has given out 33,000 SIM cards to Syrian refugees in Jordan and 85,704 solar lanterns for cellphone charging, theTimes reported.

Smartphones also help keep friends and family up to date. Messaging tools like WhatsApp allow easy and instant communication in what can be high-pressure situations, and built-in GPS can open new paths to crossing unchartered, and likely treacherous, territory. Beyond that, some Facebook groups help facilitate border crossings—being able to connect with those groups instantaneously can mean the difference between making it across and not.

In phone and text interviews over WhatsApp, Maziad makes it clear that the journey was dangerous and full of setbacks. Still, his images show how even in the hardest of conditions there can be small moments of joy—like the picture of him and his two brothers in Macedonia. “I love that photo,” he tells me.

His posts also let his family know he was okay.

“I was telling my family where I am, step by step,” he says.

He provided Vocativ with photographs from virtually every stage of his journey, mostly of members of his group clustered around his smart phone in the recognizable group-selfie pose.

Other refugees who have made their way to the relative safety of Balkan countries have also taken to posting selfies of their new life. A man named Zaher told Vocativ through Instagram posts that he was able to make it to Germany after taking a train north from Greece. One of his posts shows him snapping a selfie at a refugee camp in Kos, a Greek Island.

Another Syrian refugee, named Shafek, had his picture taken at the border of Macedonia and Greece.

He’s now in the Netherlands. He says he chose to go there because “it is in my opinion the best among EU countries and the most humane and will be a safe haven for the Syrian people. We have emerged from Syria because of the injustice and the death and destruction caused by the ruling regime.”

Several other refugees who have documented their travels on Instagram either didn’t respond to requests for comment or weren’t able to be interviewed in time for this story. Vocativ reviewed their posts for accuracy but is not embedding them without permission in this case.

Maziad’s journey, and the numerous photographs he took along the way, offer a personal window into the refugee crisis that is often difficult to comprehend in its enormity. Maziad is from Al Hassakah, a city in northeastern Syria that has become a battleground between ISIS and Kurdish forces. Before the war broke out he taught English at a primary school after studying the language in Deir ez Zor, now an ISIS stronghold. He still has family members in Syria—both parents and two sisters. When he left, in December of 2014, he fled to Turkey to wait for his two brothers.

When they eventually joined him, the three brothers teamed up with 19 others and, on June 26th, started their journey from the beachside Turkish town of Izmir City. “We were on the sea for one and a half hours,” says Maziad. They landed on the Greek island Mytilene, and walked 65 kilometers to the refugee camp there.

The raft ride between Izmir, Turkey, and Mytilene, Greece

“It was a bad camp,” says Maziad. “There was no food, no shower.” There wasn’t even room for them inside the camp’s boundaries, so for three days they slept outside in their own tents and sleeping bags.

They were cleared after three days to go to Athens, where they were told they’d have to wait more than a week before they could get official papers from the local police that would allow them to stay Greece for six months without fear of deportation.

Athens was expensive, so they all decided to continue on without that documentation. They took a train north, and then a bus to the Macedonian border. “They wouldn’t let us cross,” Maziad says, and estimates that there were roughly 1,000 refugees stuck at the border.

He’d been tracking their progress with an app called MapsMe, which allows users to use detailed maps without an internet connection. Now that they had hit a dead end, he charted a new course. They started walking along the river on the border until they got to the first village. The police on the bridge turned them away, so they kept going. They eventually found a crossing, and made it to a train station. Maziad estimates they walked 85 kilometers over roughly 15 hours on that leg of the trip, with only short breaks to rest. “It was so hot during the day and so cold at night,” he tells Vocativ.

One desperate moment in Macedonia became an unlikely happy memory. “When we were walking, we finished our water,” he says. All their bottles were empty, and they were desperately looking for a place to refill them. “We found water coming from mountain, fresh water from the mountain. We said: yeah, water, water, water! We said thank god, it was a happy moment.”

They took a 6 a.m. train north to the Serbian border, where, on a third attempt to cross, they had to outrun border guards. They continued north to Belgrade, Serbia and paid a woman 1,030 euro each to take them through Hungary to Vienna, Austria. Refugees navigating that stretch right now face new dangers – from a fence Hungary is erecting to grappling with harsh conditions as they get smuggled through Austria.

The group made it safely to Austria, and that’s when the group split up. They knew they would never get across the border to Germany, where they wanted to end up, if they went together. Maziad and his two brothers were able to cross, and are now in Dorsten, an area with relatively few Syrian refugees.

He still texts with his family in Syria. The Internet connection is too slow for much else. Although he escaped the war, he worries about them, and wants to bring them to Germany. “They are in serious danger,” he says. “My family is in danger, the city is surround by ISIS.”

His answer for why he posted the photos is simple, and straightforward. “It’s memories,” he says. “I will start again. A new life.”