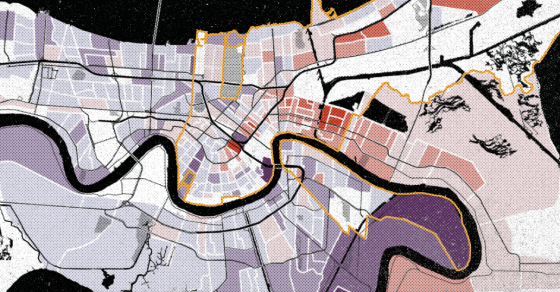 After the floodwaters receded, many neighborhoods never fully recovered, while others have become more expensive 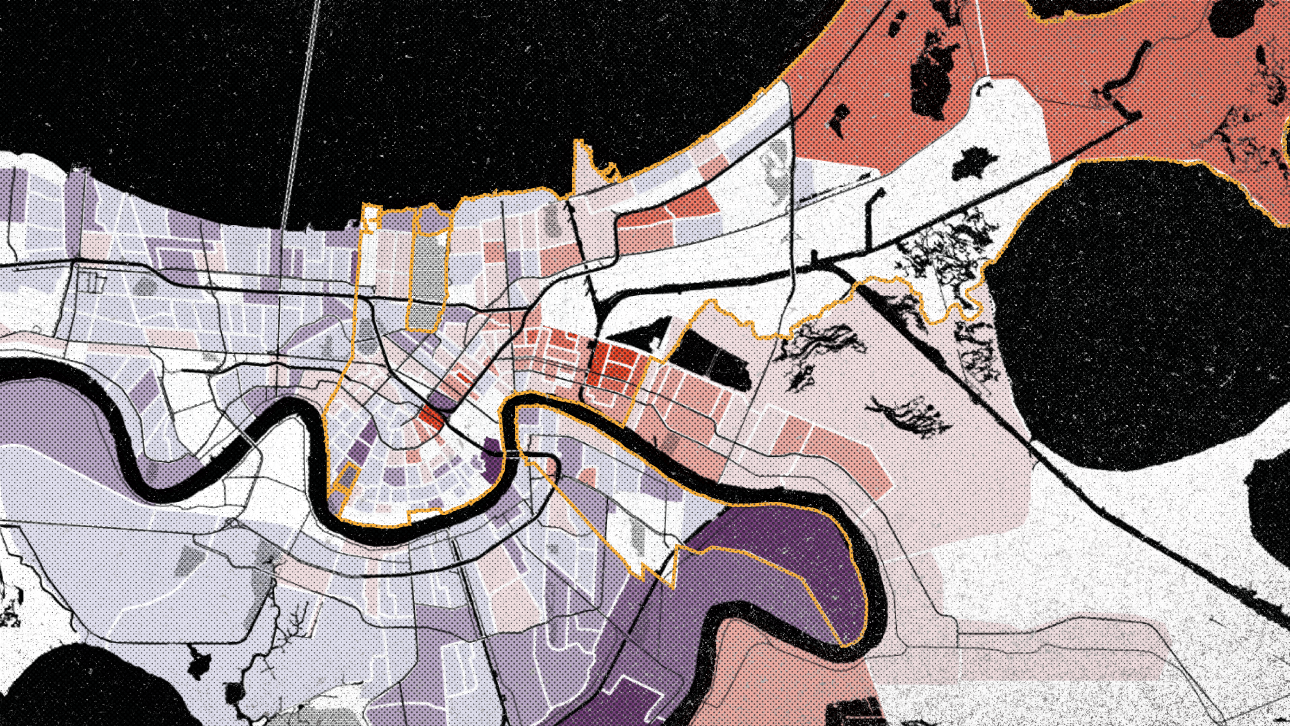 It has been 10 years since Hurricane Katrina flattened and flooded vast areas of New Orleans, and the city still looks much different than it did before the storm. It likely always will. Some sections of New Orleans are thriving, experiencing real estate booms, complete with surging housing prices. But there are other areas that have never been fully rebuilt, and to which the population has not returned to anywhere near what it was before the levees burst, a data analysis by Vocativ shows.

The Lower Ninth Ward, a working class area that was one of the sections of the city hardest hit by Katrina is emblematic of the places that have still not fully recovered. As of last June, its population was still just 37 percent of what it was before Katrina, compared to 89 percent citywide, according to the South Louisiana Data Center.

On the other end of things is New Orleans’ city center, much of which suffered what was comparatively only moderate damage. Housing prices there have soared in recent years, especially as well-off people from outside the city have moved in and to some extent changed the look and feel of the area, and not always in ways that longtime residents appreciate.

In addition to exacerbating the city’s class divides, these movements have also affected, and been affected by, its racial divides. Many of the areas where the storm’s power was felt most acutely were predominantly African-American. Lakeview, a largely white and upscale community, was a notable exception. While those places that were harmed less by Katrina, and that have rebounded more quickly and more fully, were places where the population was majority white.

New Orleans’ renowned French Quarter is one of those largely white areas. It is also one of the most expensive places in the city. Condominiums there can cost new buyers up to $600 per square foot, according to Gardner Realtors’ Terry Roff. Rising prices in places like the French Quarter, the Garden District and Uptown are driving out the African-American population. In Uptown, for instance, the African-American population fell in almost 15 percent between 2000 and 2010, while the white population rose more than 11 percent, according to U.S. Census data analyzed by Vocativ. Uptown and the Garden District have more family-sized homes than the French Quarter, but prices can still come close to $500,000 in some cases. 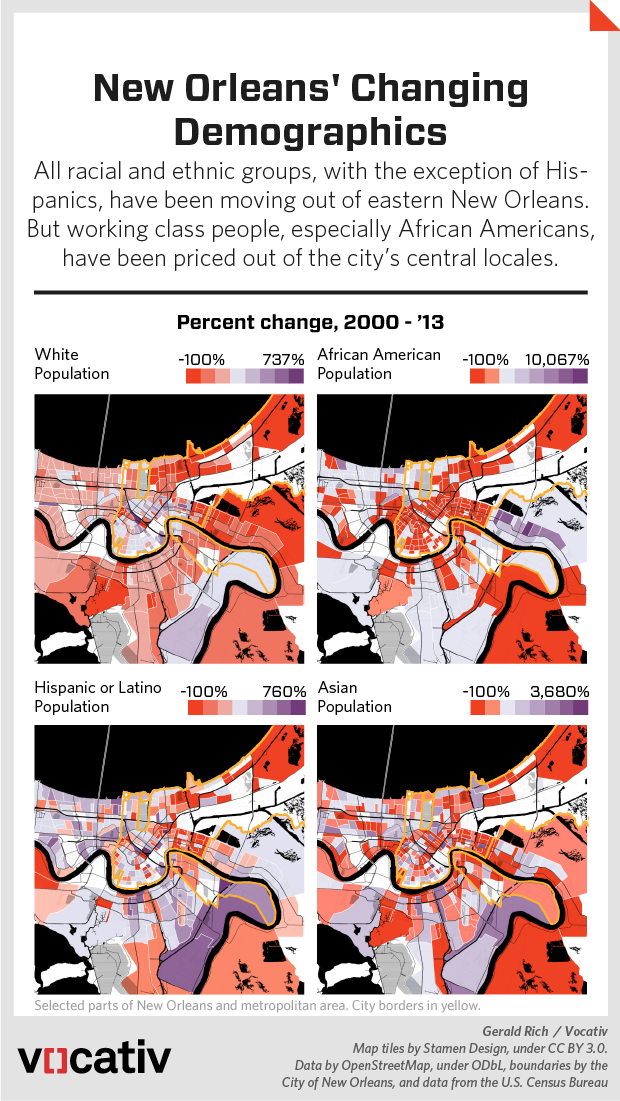 Treme, the focus of the HBO series that ran between 2010 and 2013, is also booming. “The people who want to be in the French Quarter, but can’t afford it, move there. You can still find some properties there to renovate,” Roff said. This isn’t to say that it’s only the most upscale neighborhoods where people are being priced out. In Mid-City, a working-class neighborhood, prices are up to 40 percent higher than they were before Katrina, according to Roff. Part of this is due to young people moving into the city from out of town. They are going to New Orleans in part because of its culture, of course, but also for new jobs opening up there. The University Medical Center, a $1.1 billion project, opened in Mid-City at the beginning of August. A new VA hospital also slated to open next year is expected to bring more jobs, and higher housing prices. New Orleans’ tech industry is also growing and bringing new people to the city.

New Orleans’ communities have fought hard for their survival since Katrina, and there are countless stories of resilience, both on the individual and community level. Noteworthy as one example among them is New Orleans East. Some 95,000 people lived in the area before the storm, according to the 2000 U.S. Census. Its low-lying position on the edge of Lake Pontchartrain meant it was one of the first areas hit when the levees broke. The community, largely middle-class and African-American, fled with the rest of the city. But now about 75,000 people live there again, and experts in the area believe those are former residents who came back, not new people moving in.

Joan Heisser, a local realtor at Great Developments, said many residents came back to rebuild their homes from the studs up, but didn’t recreate what stood before. “They improved on the layout of their properties and reconfigured the floor plan. They built elevated, eight-foot ceilings, and many homes now have ceramic floors and granite counter-tops.”

After the storm, businesses initially shunned New Orleans East, but the opening of the New Orleans East Hospital in 2014 helped spark a resurgence in commercial development. Still, the future of New Orleans East, and the city as a whole, can only be guaranteed through ingenuity. Gerry Galloway, professor of engineering at the Glenn L. Martin Institute at the University of Maryland, says the city faces the same struggle as other low-lying areas like Venice, Italy, and the Netherlands.

The Big Easy is sinking. Not only are sea levels rising, but New Orleans is subsiding, due to deposits from the Mississippi River creating a downward pressure on the land. Between 2006 and 2013, the Army Corps of Engineers built new levees to the elevation of the so-called 100-year flood, an event which has a one percent chance of happening in any given year. The levees were built to withstand the worst flooding anticipated up until 2057, but Galloway said future generations will have to do more than simply build levees if New Orleans is to survive.

“New Orleans is part of the totality of the Gulf Coast, which is disappearing. Over time, if people don’t do anything, in 50 years they may have a real problem,” said Galloway, who is a member of the Louisiana Governor’s Advisory Council on Coastal Protection, Restoration and Conservation and a retired member of the Army Corps of Engineers.

“The work that needs to be done is not just build levees. The work must include flood proofing and elevating homes, having power stations at higher elevations, and pumping stations to get water out from behind the levees if it ever happens to come in. And having good evacuation plans. Having identified where the underprivileged and disabled are located. All of those things build resilience and reduce risk.

“It may be that by that time, just like it will be in Mumbai or Singapore, they will have made adjustments in the structure of the community to account for that. That may mean moving some people out of some areas and protecting less area. It’s not an easy job, and once you’ve taken it on, it’s awfully hard to let go.”