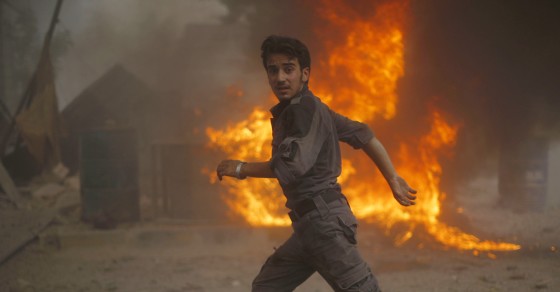 “We Are Being Exterminated Brothers,” Say Syrians In Douma
By John Knefel

“We Are Being Exterminated Brothers,” Say Syrians In Douma

The Syrian government’s targeting of a rebel-held area a mere 10 miles from the capital of Damascus stretched into a third day of air strikes, with the latest number of casualties still unclear.

On Sunday at least 100 people, many of them civilians, were killed as Syrian President Bashar al-Assad unleashed his airforce on a marketplace in the town of Douma, in one of the deadliest single strikes during the four-year war gripping Syria.

One journalist in Douma posted photographs of the strikes from the third day.

Translation: “We are still being exterminated, brothers. This picture was taken right now from the residential buildings of Douma. The picture says everything and I don’t know when it will stop.”

“Translation: “Live images showing heavy smoke from the center of Douma due to the bombings on the city. Allah is sufficient for us and He is our Guardian”

This video, said to have been recorded on Tuesday, shows a patrol from Syria Civil Defense, a humanitarian group that often acts as first responders. “There are jets in the sky,” says the man in the video, when a bomb hits a nearby building.

The airstrikes come a day after the UN Special Envoy for Syria Staffan de Mistura visited the country and issued a blistering condemnation of the Douma air campaign. During Syria’s four-year civil war over a quarter of a million people have been killed and about 9 million have fled their homes.

“The Government’s bombing of Douma yesterday is devastating,” de Mistura said in a statement. “Attacks on civilian areas with aerial indiscriminate bombs, such as vacuum bombs, are prohibited under international law. Hitting crowded civilian markets killing almost one hundred of its own citizens by a government is unacceptable in any circumstances.”

Also on Tuesday, the Assad government pushed out rebel forces from four towns in the northwest, according to Reuters, who reported the Douma bombings had entered their third day. President Assad recently admitted that his government was struggling to maintain its military forces after four years of ongoing war.

The United States condemned the Sunday strike. “Yesterday’s airstrikes, following its other recent market bombings and attacks on medical facilities, demonstrate the regime’s disregard for human life,” said State Department spokesperson John Kirby in a statement. “As we have said, Assad has no legitimacy to lead the Syrian people.”