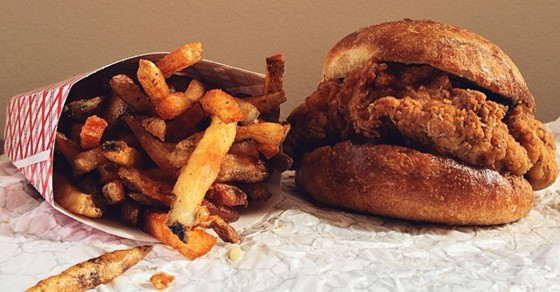 Why Southern Diets Could Cause Heart Attacks
By Joshua A. Krisch

Why Southern Diets Could Cause Heart Attacks

Surprise: a "southern" diet consisting of fried chicken, gravy and sweet tea may be rough on your arteries

Southern-style diets, consisting of fried food, processed meat and sugary drinks, may be linked to heart attacks, according to a new study from the American Heart Association. The findings suggest that broad diet patterns may predict a patient’s lifelong risk of developing coronary heart disease.

Coronary heart disease is in decline in the United States, but it still claims 380,000 lives every year. Prior studies have implicated red meat and saturated fats as problem foods, but we know almost nothing about how overall diet effects risk of heart disease. And that’s a problem—because unhealthy foods are seldom eaten in isolation. For every chicken wing, there’s a butter roll.

For the study, researchers tracked the eating habits and general health status of 17,418 people over the course of about five years. Participants answered a telephone survey about their eating habits and then agreed to a physical exam and follow-up phone interviews every six months for the duration of the study.

Not surprisingly, Southern diets are not good for you. The study found that Southern-style foodies tend to be male, African American residents of North Carolina, South Carolina, Georgia, Tennessee, Alabama, Mississippi, Arkansas and Louisiana—the so-called stroke belt of the United States. Those participants had a 56 percent higher risk of heart disease than the average American. Incidentally, the researchers did not find that any of the other dietary patterns were linked to heart disease (which is surprising, given the amount of research showing that plant-based diets prevent heart disease).

Meanwhile, researchers from the National Cancer Institute are unimpressed by the results. One of the problems with the study, they say, is that the parameters for a so-called “southern diet” are too arbitrary. Who’s to say what makes a diet “southern”, they ask, and how can we be sure future studies will follow the same (arbitrary) naming convention? “Unless methods of collecting the data are comparable and food group construction is standardized, results are not comparable across studies,” the NCI researchers wrote in a critique of the original study. “We believe these assertions deserve further consideration.”