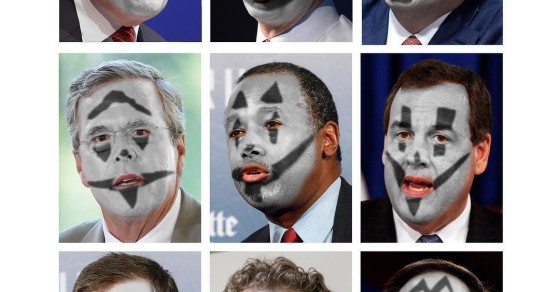 With over 11,272 GOP Debate pics tagged, the #GOPDebate hashtag landed on Instagram’s trending tag matrix on Friday alongside more regular pop culture-based trends like #JonVoyage, #LukeBryanOnGMA, and NAWARD2015. Instagram proved its worth as a multifaceted platform, with users from around the world participating in the debate and sharing their personal views on the candidates in their own special Instagram way: memes, party pics and original artwork.

Memes took over the post-debate images and conversation, particularly a farcical phone conversation between Hillary Clinton, President Barack Obama, and VP Joe Biden. Newsrooms and PR agencies took time to post their setups for debate coverage, and others shared community gatherings where people ordered pizza, played drinking games, or threw full-on parties as a means of showing their political activeness. Democratic hopefuls like Bernie Sanders used Instagram to share their lofty thoughts on the debate, while other users posted selfies or behind-the-scenes footage from the Quicken Loans Arena in Cleveland, giving us mere mortals a glimpse of what it was like to attend the actual event.

Twitter, by comparison, reeled in over 1.5 million uses of the hashtag #GOPDebate in the past 24 hours, reigning in its glory as the top platform for political coverage. But, the images on Instagram provide a unique look into how younger, more aesthetically-inclined users visualize political events and cover newsworthy stories they may or may not personally be involved in. As the race to the White House continues, it will be interesting to see how photo and video-based platforms like Instagram, Snapchat and Periscope run full-steam ahead in the race for political coverage.

Me, some students, and Chris Christie at the #gopdebate last night. What an awesome experience.

What an absolutely amazing experience last night! So honored to have been able to attend the #gopdebate last night in Cleveland. No doubt about it, Ohio Governor #Kasich4Us is my guy!

We had fantastic turn out by community members and local media last night to watch the #GOPdebate. As political parties court the #Latino #vote it is important that our community stay as informed as possible. An informed community is an empowered community. #HouNews #HYD2015

#Desaparecidos railing against corporate greed at #WebsterHall last night with the #GOPDebate running in the background.