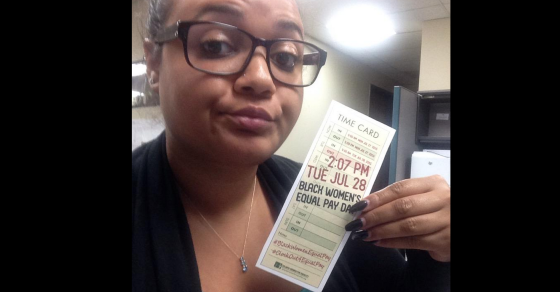 The Startling Numbers Behind #BlackWomenEqualPay
By Sarah Kaufman

The Startling Numbers Behind #BlackWomenEqualPay

Almost 9,000 tweets in the past 24 hours have used the hashtag to remind people that if black women made the same wages as white men, they could clock out at 2:07 p.m.

#BlackWomenEqualPay and #ClockOut4EqualPay were trending Tuesday afternoon around 2:07 p.m., exactly the time black women could technically clock out of their work day if they were making the same hourly wage as white men.

Almost 9,000 tweets on Tuesday alone used the hashtag #BlackWomenEqualPay as part of a movement to leave work at 2:07 p.m., according to numbers calculated by Topsy. Here’s the reasoning behind 2:07 p.m.: According to 2014 census data, black women make 64 cents for every dollar a white man makes, and 2:07 p.m. represents 64 percent of the way through a nine-to-five workday.

Tuesday’s date marked Black Women’s Equal Pay Day for a very specific reason: African-American women have to work almost 19 months, or 208 days into the next year, to make as much money as white men did in just the previous year alone, according to National Women’s Law Center. Tuesday was the 208th day of 2015.

The organization Atlanta Women For Equality started a social media movement asking for people to take selfies with a time card they created and ignite a conversation about racial and gender inequality in the workplace. Over the course of an entire 40-year career, that difference in the wage gap can add up to $776,000, the NWLC reported. Taking into account the current wage gap, it would take a black woman 63 years to earn what a white man earns in 40 years.

Today is #BlackWomenEqualPay Day. Black women have to work 208 days into 2015 to make as much as a white man did in 2014. Inexcusable.

Some of the 2016 presidential candidates have also entered the discussion. Bernie Sanders endorsed equal pay for black women more than a week after a social media firestorm that followed him when he was jeered at a liberal conference in Phoenix, Arizona.

Men, we have to stand with women and fight for full pay equity. #BlackWomenEqualPay Day pic.twitter.com/Vn7koERaLJ

.@HillaryClinton gets it exactly right on #BlackWomenEqualPay Day — we deserve more pic.twitter.com/XMXJmo0P0q