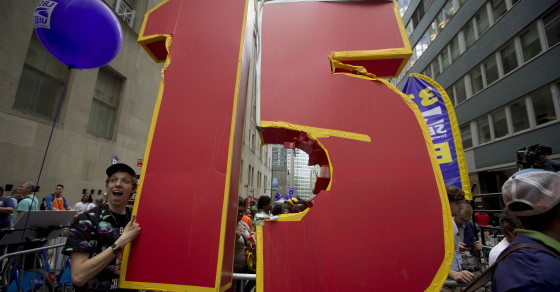 Fast Food Workers Will Soon Earn More Than These Other Professionals

In New York, $15 an hour puts them ahead of pre-school teachers and morticians

The people who flip your burgers and add salt to your fries will get paid more than some preschool teachers, morticians, drug rehab counselors and lifeguards as the minimum wage for fast-food workers in New York is expected to rise to $15 by 2020.

The increase represents a raise of over 70 percent for workers who currently make the state minimum wage of $8.75, but only employees at Subway, Wendy’s, Panera Bread and other fast-food chains with more than 30 restaurants will be eligible.

Earning $15 an hour would put workers who prepare and serve Whoppers, Egg McMuffins and Chalupas at a higher income than a range of entry-level skilled professions in New York City today. This is provided they work 40 hours per week, which works out to an annual salary of $28,800.

#FightFor15 trended for a time on Wednesday and Thursday as the fight for a wage hike in New York continues to inspire similar movements in cities including Boston and Miami. Los Angeles, San Francisco and Seattle have already introduced a $15 minimum wage, with a vote on a similar increase expected in Washington, D.C., next year.