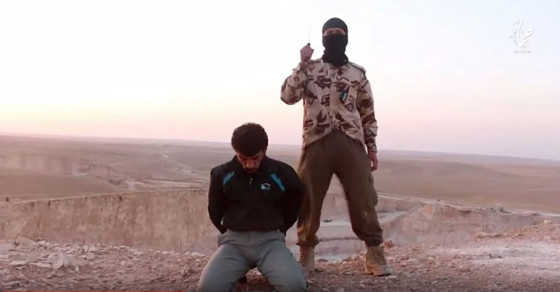 ISIS Vows to “Fill The Streets Of Paris With Dead Bodies”

ISIS’ official media wing in Syria’s Hama province published a video Wednesday showing a French-speaking militant shooting a Syrian army prisoner and declaring that the Islamic State “will fill the streets of Paris with dead bodies.”

The ISIS militant addressed his “message” to the French, the international community and “everyone who fights Allah and his prophet,” proclaiming that the Islamic State loves death “like you love life.”

The video followed the Tuesday publication of ISIS’ French-language propaganda magazine. In the latest edition, the group called on Muslims to follow in the footsteps of Yassin Salhi—the van driver who carried out a horrific attack last month near Lyon, France. The magazine provided readers with a detailed description of the attack, which took place at a gas factory when Salhi drove his truck into a chemical plant and beheaded his boss. ISIS did not claim responsibility for the violent incident but encouraged similar individual assaults, calling on Muslims to “hit the interests of the enemies of Allah.”

The magazine is one of several the Islamic State publishes, including two others written in Russian and English. It is hosted on a San Francisco-based digital library, archive.org, and is being circulated among French speakers on social media.