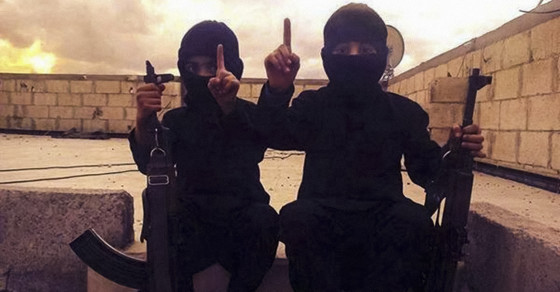 With no end to the conflict in sight, observers fear there is little way to help the child recruits ISIS uses as soldiers and for all manner of brutality 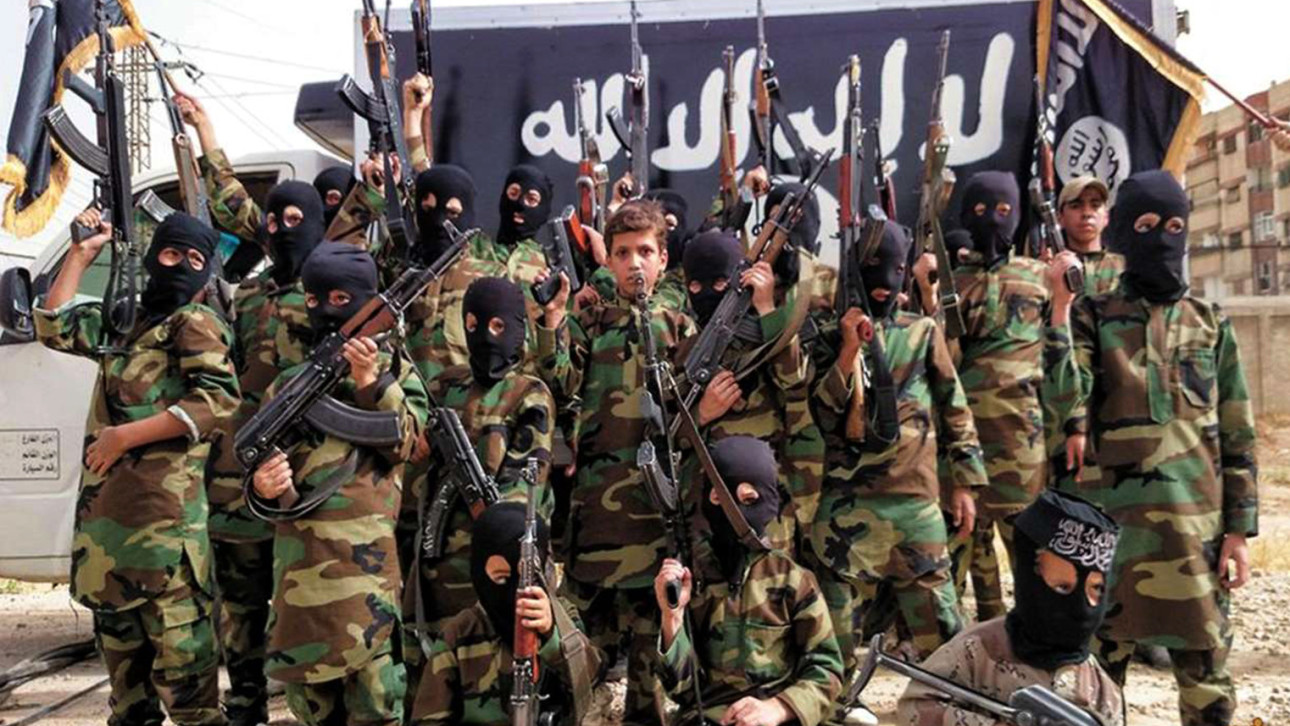 The boy hovered above the handcuffed soldier, who confessed to being a Syrian army captain. Clad in camouflage and clutching a small knife, the child, one of the Islamic State’s newest recruits, forced his prisoner onto his stomach. He jerked the man’s head back by his hair and put the blade to his throat. Then he began to saw. Later, the boy, whose name and age are unknown, posed with the prisoner’s severed head.

The scene, filmed outside the Syrian city of Palmyra and released by the Islamic State last week, marked the first time ISIS had publicly shown a child carrying out a decapitation. And it was the third time in less than two weeks that the jihadist group bragged about a killing committed by its growing band of child soldiers.

The spate of killings carried out by children this month underscore the Islamic State’s success in molding a new generation of militants that, to many experts, appears different and in some ways more disturbing than the child soldiers used in previous conflicts around the world. A disparate band of psychologists, human rights advocates and aid workers is now warning that the programs used to treat children forced to fight in other wars—many of whom develop psychological disorders after the fighting, and who are sometimes banished from their communities—may not work in rehabilitating those living under ISIS. Some fear an entire generation of boys and girls could already be lost.

“I don’t think we’re remotely ready for the challenge of de-radicalization, let alone re-integration of these kids, ” said John Horgan, a psychologist and terrorism researcher at Georgia State University who has closely followed the Islamic State over the last year. “It’s absurd how behind we are in planning for this.”

Some of the methods that the Islamic State uses to control and dominate its youngest occupants bear an unsettling familiarity to conflicts past. As in the civil wars that have ravaged countries like Sierra Leone and Sri Lanka, ISIS militants have allegedly abducted, raped, bartered and executed young boys and girls. They’ve recruited tweens and teens to be soldiers, bodyguards, spies and suicide bombers.

But what sets the jihadist group’s exploitation of children apart, say terrorism and human rights experts, is how aggressive and systematic it is. Deviating from previous wars, ISIS looks beyond the battlefield, seeking an unwavering commitment from its child militants.  Plucked from schools and mosques—and sometimes willingly handed over by parents—the group’s young recruits are nurtured on an ideology that’s rooted in a radical interpretation of Islam.

“What especially frightens me is the combination of emerging state structures, extremist ideology, atrocities on a mass scale, and a willingness to involve children,” said Steven Weine, a professor of psychiatry at the University of Illinois at Chicago who has studied the lasting impacts of political violence. “It will create enormous problems down the line that are hard to even fathom.”​

The group’s use of children is also public—and often orchestrated for the world to see. ISIS fighters lure young recruits to outdoor events with candy, toys and execution videos. They exhibit bands of child soldiers performing military drills, firing weapons and reciting scripture from the Quran. And they use them to carry out public executions.

The children of foreigners who travel to Iraq and Syria to join ISIS have also been employed for propaganda purposes in this way, to great effect. In what has become one of the most iconic depictions of ISIS brutality, a 7-year-old Australian boy was pictured last year in Syria posing with a severed head. “That’s my boy,” read a caption to the photo, reportedly posted by the child’s father, Khaled Sharrouf.

Such accounts have been documented by the United Nations, in reports by those who have fled or escaped and through the militant group’s own brutal propaganda. They have left members of the international aid community reeling.

“This is one of the worst cases I’ve been involved in,” Renate Winter, an international judicial monitor and member of the United Nations’ Committee on the Rights of the Child, told Vocativ. “Their cruelty is a war tool to terrorize children living in the area, terrorize their families into obedience and impress the youth of other regions.”

The group’s use of children has become increasingly violent. ISIS released a video this month that showed a group of teen militants slaughtering 25 Syrian soldiers. Days later, the jihadist group claimed responsibility for a deadly suicide bombing carried out by a 14-year-old boy. The video of the child decapitating the Syrian army captain came next. On Sunday, the Associated Press reported more than 100 boys were shown beheading videos at a training camp and were later given dolls upon which to re-enact the executions.

“I don’t think we’re remotely ready for the challenge of de-radicalization, let alone re-integration of these kids.” —John Horgan, psychologist and ISIS expert

As they become full-fledged militants, these children are routinely in harm’s way. At least 52 child soldiers groomed through ISIS’ “Cubs of the Caliphate” program in Syria have been killed so far this year, 31 of them just in the first two weeks of July, the Syrian Observatory for Human Rights reported. Another eight children were used as suicide bombers.

All told, the Observatory, a British-based monitoring group, says ISIS has recruited at least 1,100 children to be fighters in Syria alone since the beginning of January. The exact number of children fighting for ISIS in Iraq and Syria is not available and could be much higher, observers say. Approximately 7,000 children fought in Sierra Leone’s civil war between 1991 and 2002, according to Child Soldiers International, a monitoring group. As many as 300,000 child soldiers are active in current conflicts worldwide.

Juliette Touma, a UNICEF spokeswoman based in Jordan, told Vocativ that dwindling aid and economic opportunity in recent months has added new pressures, forcing families to sell their children to the Islamic State—as well as other groups fighting in the region—in order to feed the rest of their household. “As long as the conflict in Syria continues we’re going to continue seeing children recruited in that form,” she said.

Terrorism and human rights researchers fear that ISIS’ prolonged existence could jeopardize countless Iraqi and Syrian children. “Not only does the military and political conflict need to be settled,” said Weine. “We need to face the consequences of what ISIS has done to children—traumatizing and indoctrinating a whole future generation.”​

Child soldiers fighting for ISIS show off their weapons.

The consequences could be devastating, experts say. Studies of former child soldiers in Uganda, Sierra Leone and other conflict regions have found them to exhibit high rates of depression, PTSD and anti-social behavior. Those disorders appear most pronounced among children who reported wounding or killing individuals while fighting, the studies show.

Many young fighters also carry with them an intractable stigma when they return to their homes and communities, and are susceptible to being re-recruited for future conflicts, said Thomas Elbert, a clinical and neuropsychologist at the University of Konstanz in Germany, who has authored comprehensive research on child soldiers. Other researchers told Vocativ that programs centered around family-, community- or religious-based reintegration can be effective in treating child soldiers.

The tools used to reintegrate children in other conflict regions, however, may not work with those living under the Islamic State. Sectarian strife, fractured family lives and the militant group’s indoctrination tactics could undermine the foundation of most current programs. And with no ceasefire or end to ISIS’ self-declared caliphate in sight—and with Syria and Iraq plunging further into chaos—child and human rights workers concede there is little in the way of remedy at this time.

Horgan, who is co-authoring a book on terrorism and children with colleague Mia Bloom, said that the international community faces great challenges ahead. One of them, he said, will be determining whether the children of ISIS should be viewed as victims of war or as terrorist perpetrators.

“They’ve clearly been seduced and groomed by these jihadists,” Horgan said. “But are we going to think of them as victims in need of saving? Or as fully-fledged militants, fighters and suicide bombers?”