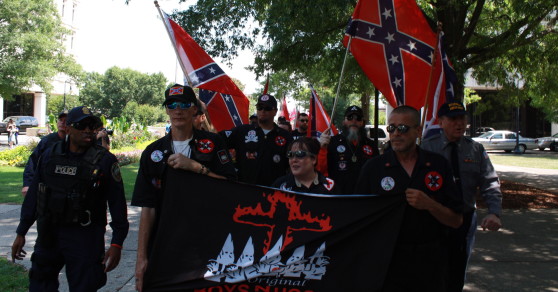 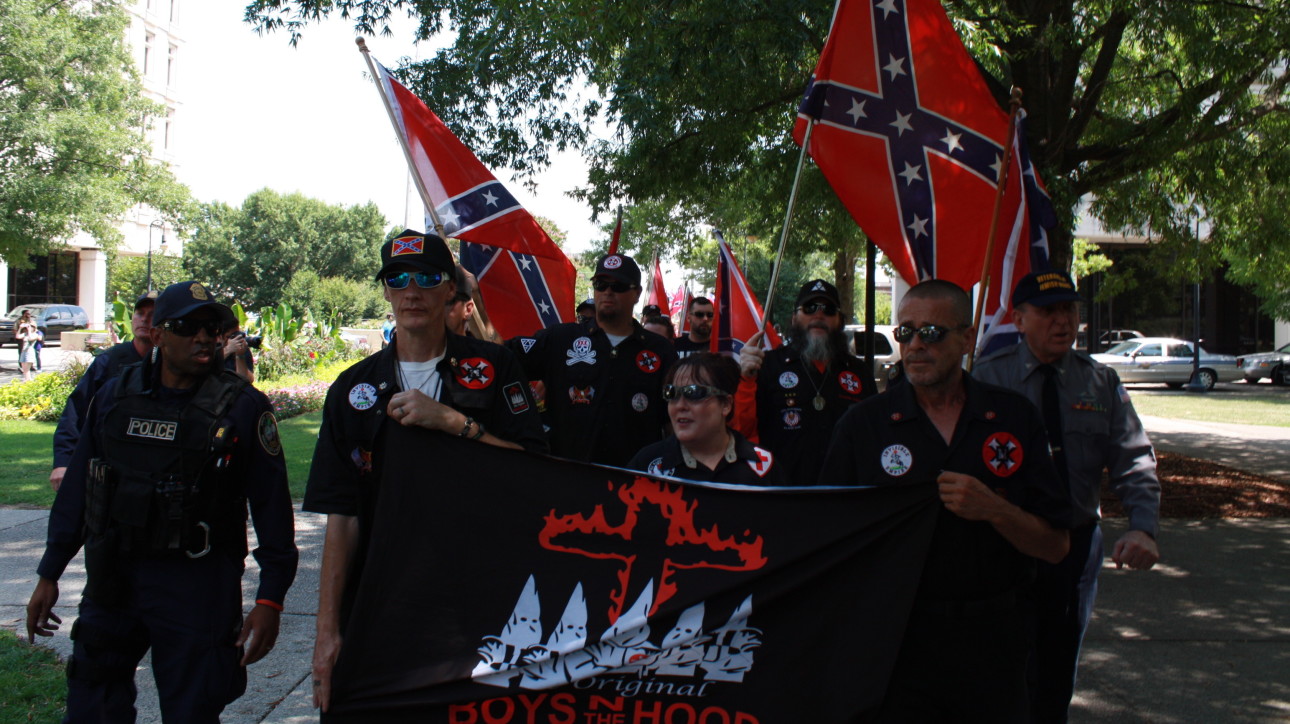 There were no white robes or burning crosses at the statehouse in Columbia, South Carolina, but there was more than enough hate to go around on Saturday, when members of the Ku Klux Klan, the National Socialist Movement and an offshoot of the New Black Panther Party held dueling protest rallies on opposite sides of the Capitol building.

There were at least eight children under the age of 13 marching alongside adults carrying flags with swastikas and other racially charged symbols.The KKK arrived late to their own rally and were escorted by police as they and members of the National Socialist Movement, a white supremacist group, marched in a line up a walkway on the south side of the building.

As the group of about 60 white supremacists—some from as far away as Georgia and Florida—chanted “white power,” they were met by hundreds of counter-protestors waiting in front of the Capitol for their arrival.

Protestors threw water bottles at the KKK and National Socialist Movement Nazis, who were ushered into a fenced-off area by police as they waved their Confederate flags and other provocative symbols. Opponents of the two hate groups were heard yelling out “f*** the Ku Klux Klan” and “the Klan doesn’t represent me.”

The Confederate flag was taken down from the statehouse on July 10th after the June murder of nine black churchgoers by alleged white supremacist Dylann Roof in Charleston touched off a national debate.

White supremacists trade verbal jabs with other protestors on the Capitol steps.

Members of a New Black Panther Party offshoot held their own rally on the north side of the Capitol building.

The racial unrest in Columbia began before the KKK even arrived. On the north side of the building, members of the Black Educators for Justice and the Black Lawyers for Justice—offshoots of the New Black Panther Party—stood on the Capitol steps, some dressed in military-style fatigues, as speakers doled out their own share of racial rhetoric. Black Lawyers for Justice co-founder Malik Zulu Shabazz did not appear at the rally because he is reportedly on the U.S. government’s Terrorist Screening Center’s no-fly list, though Vocativ could not confirm that independently and it appears at odds with the fact that Shabazz was in Charleston after last month’s church shooting. Shabazz is on the Southern Poverty Law Center’s list of hate group leaders.

Protestors gather in solidarity against the Klan's rally in front of the statehouse.

Protestors clash with police and each other prior to the Klan's arrival at the state Capitol.

Meanwhile, a handful of people began to gather on the Capitol’s south side, where some marchers were draped in Confederate flags, while others were there to protest the KKK. Both groups clashed several times before the KKK’s arrival and police swooped in to separate the growing crowd as it became increasingly hostile. No punches were thrown, but there was plenty of shoving by both the protestors and the police, who had a large presence all over the Capitol grounds. Some were perched on the rooftops of surrounding buildings as a police helicopter buzzed overhead.

Protestors join in solidarity with African-Americans to speak out against the KKK and the flying of the Confederate flag.

Demonstrators debating the meaning of the Confederate flag.

Throughout the capitol grounds, signs telling protesters that concealed weapons were prohibited were made very visible.

At least four people were arrested, but authorities would not confirm the official number.

As the banter between the white supremacists and the protestors simmered, people began to leave the Capitol. Some members of the KKK planned to attend a second rally at a different location. Others, like Tracy Garret, said she and other members planned to “get a nice dinner and head back to Georgia.”