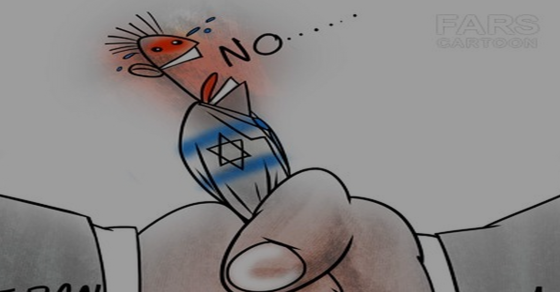 Cartoons from the Fars news agency celebrated the nuclear deal, while taking jabs at Israel for failing to stop it

One of the largest news agencies in Iran published several cartoons Wednesday that celebrated the country’s nuclear deal with the U.S. and other Western nations, while at the same time ribbing an “angry” Israel for failing to stop the historic agreement.

The deal, announced early Tuesday morning, prompted many Iranians to celebrate on social media, but Israeli leaders across the country’s political spectrum condemned it with strong language. Israeli Prime Minister Benjamin Netanyahu’s Education Minister Naftali Bennett deemed it “one of the darkest days in world history.” Netanyahu, himself, released a four-minute video after the agreement was announced, in which he said, “The world is a much more dangerous place today than it was yesterday.”

That response was the subject of cartoons published Wednesday by Fars, a “semi-official,” privately owned Iranian publication and one of the countries largest news agencies.

Translation: The result of the nuclear talks.

Translation: The Zionist regime did not succeed. (on the apple: Agreement, 5+1)