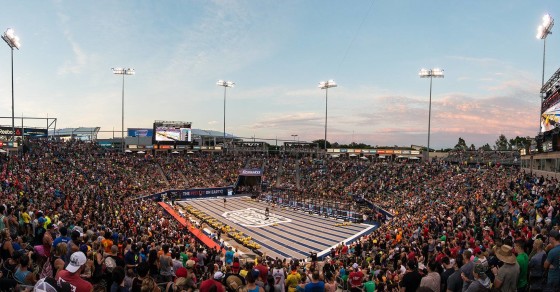 Fans of The CrossFit Games Are Serious About Fitness

You think CrossFit fans are crazy in shape? Wait till you meet the people who like The CrossFit Games.

CrossFit fans are gearing up to descend on Carson, California, next week for the 8th Annual CrossFit games. Men and women from around the world will compete by doing the functional exercises that made the fitness trend ultra popular in the last decade.

The stage: ESPN which will broadcast every minute of the games online and air for over 16 hours of TV coverage.

With the corporate backing of Reebok, the title sponsor since 2011, The CrossFit Games seem poised this year to overtake your feeds with videos of gymnastics, olympic weightlifting, and old-school calisthenics that leave participants lying on the floor gasping for air.

And the people who’ll be watching? Fanatics, in every sense of the word.

A Vocativ analysis reveals that fans of The Crossfit Games on Facebook, and people who interact with that page, are what you might call “the gym-going elite”.

They’re older than the average CrossFitter. They’re also more likely to be married, more educated, and in the military, or a veteran.

And you could say they have a monomaniacal interest in staying fit.

We also found that, compared to CrossFitters in general, fans of the CrossFit Games are more likely to be women. While only 13 percent of CrossFit fans are women, CrossFit Games followers are 38 percent women.

CrossFit Games fans are also more likely to be married and are slightly more educated. While CrossFit is popular among military personnel, the CrossFit games are even more so. A fifth of CrossFit Games Facebook followers are in the military.

In the end, they will have decided who among them has earned the title “The Fittest on Earth”  — and the so-called “Sport of Fitness” may be one step closer to mainstream success.