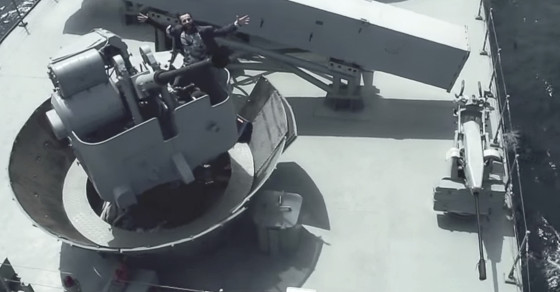 This Nuclear Propaganda Video Was Top Google Search During Talks

A pro-nuclear propaganda video by an Iranian pop star was one of Iran’s top Google searches on Sunday and Monday as the country’s nuclear deal with the international community supposedly came close to resolution, Google Trends data has shown.

Data from Google Trends shows that searches for Amir Tataloo’s video “Nuclear Energy” peaked just hours before negotiators approached a self-imposed deadline to strike a deal that would limit Iran’s nuclear program while lifting sanctions on the country.

In the video, which was posted to Youtube on Sunday, Tataloo sways and dances on the upper deck of an Iranian military vessel, rapping in Farsi. In English subtitles—which don’t appear in any of Tataloo’s other YouTube videos—the meaning of the chorus is unmistakable: “This is our absolute right—To have an armed Persian Gulf.” A search on Google Maps reveals that although Tataloo is rapping about the Persian Gulf, the scene was shot on a warship that has been permanently based in the landlocked Caspian Sea.

Tataloo was arrested in 2013 after Iranian authorities found that he was distributing his music on satellite television channels abroad without the permission of government officials, according to the International Campaign for Human Rights In Iran. Tataloo was one of several musicians arrested during a government crackdown of “underground” artists who didn’t get government approval to create and distribute their music.

According to YourMiddleEast.com, “under Iran’s Islamic law, musicians must be officially approved by the culture ministry, which checks whether a song’s lyrics and music comply with the country’s moral values.”

Tataloo did not immediately respond to Vocativ’s request for an interview. The video had amassed over 12,000 views as of Monday evening.

According to the Google News Lab, which—per Vocativ’s request—compiled a list of the most common questions Iranians are entering into Google about the nuclear deal, in addition to “download Amir Tataloo’s nuclear energy clip,” Iranians are asking questions like “What is going on with the nuclear talks” and “Where is Vienna?”