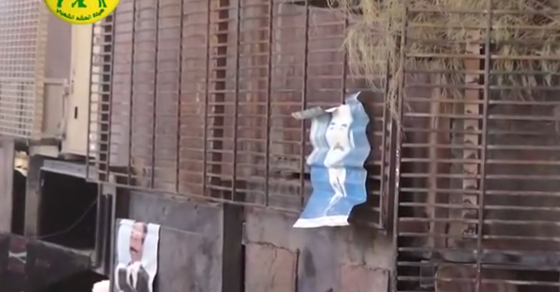 Posters of ousted Iraqi dictator Saddam Hussein were purportedly found at an ISIS bomb-making factory seized from the extremists by Shiite militias. The militias shared images of the Saddam posters in a video they posted online and across social media.

In the video, Shiite militia tour the factory, pointing out explosives and detonators, and posters of Saddam taped to a truck, which the militia fighters say was rigged with explosives. The militia said the posters of Saddam were found in the factory in the village of Saqlawiyah, just northwest of the city of Fallujah. Other images released by the militia show vehicles purportedly abandoned by ISIS fighters “who fled the area panicked, leaving their weapons and machinery.”

The Shiite militias have been gaining ground in recent days as a military campaign to retake Fallujah from ISIS gets underway. The discovery of the Saddam paraphernalia could not be independently verified, but many in ISIS’ leadership ranks once belonged to the fallen dictator’s military and have been conducting an insurgency since he was ousted in 2003.

The Shiite forces claim they have fighters deployed in six areas around Fallujah and say they have cut ISIS supply lines. F-16 fighter jets purchased by the Baghdad government from the U.S. also have arrived at the Balad air base in preparation for an assault on Fallujah.

The head of the Badr Brigade militia, Haider al-Amiri, told Iraqi television the fight to retake the city would begin once Ramadan ended this week.

Fallujah has been under ISIS control since January 2014. It’s located in Anbar is the largest governorate in Iraq, which borders Saudi Arabia, Jordan and Syria. The Iranian-backed Shiite militias, accompanied by the official security forces and anti-ISIS tribesmen, have been fighting ISIS around Fallujah and Ramadi for months. The city, which is predominantly Sunni, also has been hammered by the Iraqi Army, which has been continuously shelling the city.

Translation: Greetings from Hashd al-Shabi from a bomb-making factory.

The launching of Fallujah operations. The beginning of the end (A video uploaded today to the Facebook page of the Iranian-backed forces).