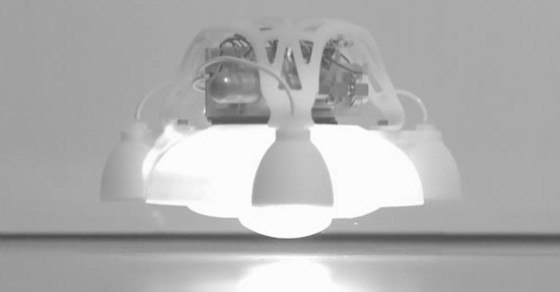 Don't all of us just want a soft-bodied robot we can hug?

In the same week scientists unveiled robots that can gobble up space debris like an interstellar Pac-Man or notify you if your elderly relative falls down, a team of researchers from Harvard and the University of California built a robot you can hug. Better still, their 3D-printed creation can jump like a frog using a battery-powered air compressor, and combines butane and oxygen for combustion while a primarily soft body absorbs the impacts.

In the future, soft-bodied robots could squeeze into tight spaces to perform tasks too dangerous for humans. It could even allow for closer interaction between robots and humans. This could help to avoid tragic accidents like the death of a man at a car factory in Germany in early July, when a robot grabbed him and crushed him against a metal plate.

“We believe that bringing together soft and rigid materials will help create a new generation of fast, agile robots that are more robust and adaptable than their predecessors and can safely work side by side with humans,” said Michael Tolley, an assistant professor of mechanical engineering at UC San Diego.