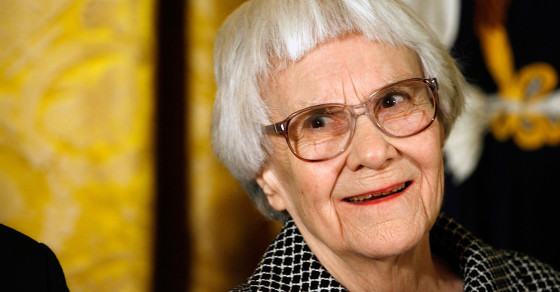 The leader of a prominent white nationalist group says the highly anticipated sequel to Harper Lee’s To Kill A Mockingbird could result in more “eruptions of horrible violence” like last month’s Charleston church massacre.

“This new book is yet another instance of rubbing the noses of today’s whites in the sins of the past,” said Jared Taylor, editor of American Renaissance and a leading member of the Council of Conservative Citizens. He said Go Set A Watchman, set for release on July 14, “could be yet another small contributor to the increasing disaffection of young whites,” and it will make “more and more young whites angry.”

Referring to the Charleston shootings, Taylor said: “Whether this anger results in more eruptions of this kind of horrible violence, I cannot say, but my feeling is that it will make it more likely. This constant drumbeat of racism as a one-way street is increasingly rejected by young whites, because it is false. Unless the greater ambiguities of the situation are recognized, unless blacks are urged to take some sort of responsibility for their own circumstances, I see no end to increasing frustration and potential violence.”

More Sales Of The Mississippi Flag Are Soaring On Amazon
​

To Kill a Mockingbird is a story about rape and racial inequality that is loosely based on historical events and Harper Lee’s synthesis of life in the South. Little is known about the plot twists of the new book beyond the publisher’s brief description on Amazon: “Go Set a Watchman features many of the characters from To Kill a Mockingbird some 20 years later. Returning home to Maycomb to visit her father, Jean Louise Finch—Scout—struggles with issues both personal and political, involving Atticus, society, and the small Alabama town that shaped her,” it says. The book is already No. 1 on Amazon’s bestseller list because of pre-orders.

Taylor’s comments echo those of users on his website AmRen.com. “Just what we need, even more ridiculous fairytales about innocent black men being accused of rape when we all know the reality of the situation. Sickening,” wrote one commenter, while a second claimed Lee was “desperate to continue with the ‘narrative’ and to continue on with the tradition of white guilt, despite the rape statistics in this country.” A third user described Lee, who grew up in Alabama and is now 89, as a “race traitor.”

Taylor, describing Mockingbird as “marvelously well-written,” said of Lee’s first novel: “She knew very well when she wrote that book that it was a portrayal that the publishing world and the public would find extremely attractive. There is nothing more compelling and convincing to northern liberals than a southerner who herself decries the bigotry and racism of southerners.”

Dylann Roof, the accused gunman in the Charleston church shootings, was deeply influenced by Taylor’s group, the Council of Conservative Citizens, according to Roof’s manifesto.