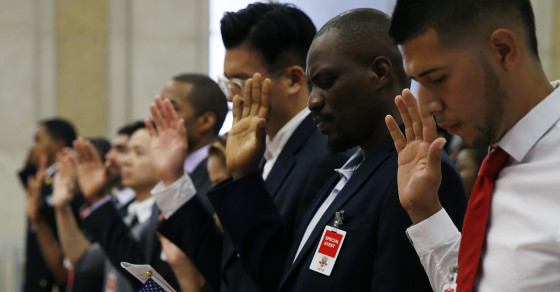 The Truth About Immigrants And Crime In The US

A new report finds that increased immigration rates coincided with a huge reduction in crime across the U.S.

A new report that will be released this week finds that immigrants are less likely than people born in the U.S. to commit crimes and end up behind bars. Despite claims by reality TV star-turned 2016 presidential candidate Donald Trump that immigrants are rapists and criminals, data in the report shows that an increase in immigrants coincides with plummeting crime rates.

The report, from the American Immigration Council, examined crime and immigration data between 1990 and 2013. It found that as the percentage of the population born outside of the U.S. grew from 7.9 percent of the total population to 13.1 percent, the violent crime rate decreased by 48 percent. Violent crimes include things like assault, robbery, rape and murder. Property crime, the report found, also took a similar plunge—crimes like car theft, larceny and burglary dropped by 41 percent.

In the U.S., rates for most crimes have been on the decline for decades, and an increase in immigration is just one of many theories as to why. Other theories range from changes in drug laws to the overturning of Roe V. Wade leading to fewer unwanted pregnancies—both of which, theorists say, could be the cause for the drop in crime rates.

The latest report found that immigrants to the U.S. are far less likely to wind up in the criminal justice system than native-born Americans—according to data from the 2010 American Community Survey, 3.3 percent of males between the ages of 18 and 39 who are born in the U.S. have been incarcerated. That’s compared to 1.6 percent of immigrants in the same age range.

The findings in the report back up research conducted in 2007 by Harvard social sciences Professor Robert Sampson that showed that Hispanics immigrants commit violent crime at a lower rate than African-Americans and Caucasians.