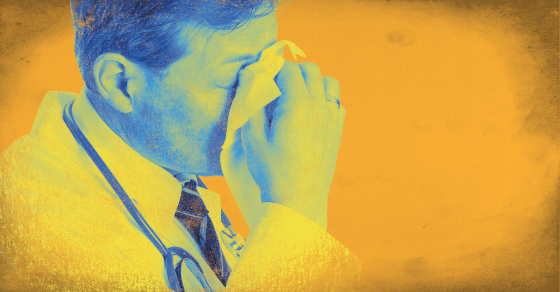 Your Doctor Doesn’t Care If You Catch His Cold
By Joshua A. Krisch

Your Doctor Doesn’t Care If You Catch His Cold

Survey: 95% of physicians and nurses believe working while sick puts patients at risk. 83% do it anyway

Doctors and nurses refuse to take sick days even when they believe that their illness will put patients at risk, according to a new paper published in JAMA Pediatrics. The study found that peer pressure was often to blame—many clinicians show up to work sick out of fear of letting down their patients, and being ostracized by their colleagues.

A survey of over 500 clinicians found that, while 95 percent believe working sick could harm their patients, 83 percent show up anyway. And the risk is not minimal. Doctors spend most of their days around patients with open wounds, scrubbing into (theoretically) sterile surgeries and counseling patients who often suffer from weak immune systems, racked by drug therapies. When a physician comes into work sick—even if it’s just a cold—he or she could be putting lives in danger.

Why would a physician, honor-bound by the oath Primum Non Nocere (first, do no harm), risk exposing patients to disease rather than just taking a sick day? “There is an unspoken understanding that you probably should be on your deathbed if you are calling in sick,” one anonymous emergency room physician commented on the open-ended essay section of the survey. “and [it] makes me look bad to do so (like I am weak or something). It is much, much less stressful to suck it up and come in sick than call out.”

Due to a mixture of peer pressure, fear of disappointing patients and the stress of finding coverage, the authors report, physicians make a quick calculation—and calling out sick just isn’t worth the stress. Meanwhile, patients are stuck with doctors who aren’t feeling their best, who are less likely to perform well in the workplace, and who are may actually make them even sicker.