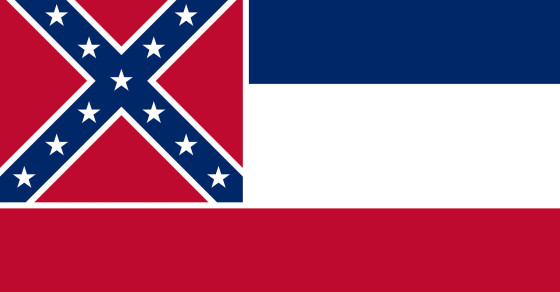 Sales Of The Mississippi Flag Are Soaring On Amazon

With the Confederate flag now banned on several of the biggest retail web sites, people looking to purchase the banners appear to have developed a creative workaround: They’re buying Mississippi state flags, which still bear traces of the Confederate flag.

According to Amazon.com, the Mississippi state flag is now one of the top-selling pennants on the website. Only the American flag, the state of California flag, and the Gadsden flag, which is a potent symbol among Libertarians, are more popular. The upper left corner of the Mississippi flag contains the Confederate battle emblem.

Retailers including eBay, Target, Walmart and Amazon banned the Confederate flag last month after sales spiked following the fatal shootings of nine African-Americans in Charleston, South Carolina, allegedly by Dylann Roof, who celebrated the flag as part of his plan to ignite a race war. The sites began tracking and removing products sold under the titles of “rebel flag” and “CSA flag.”

The retailers were part of a swell of opposition to the flag in the wake of the shooting. Movements popped up around the South to get rid of remnants of the flag–at certain sporting events and in some government buildings, among other places. South Carolina legislators are deciding whether to take down the flag at the state capitol. Following the attack at Emanuel AME Church in Charleston, politicians in Mississippi, including the local Republican party leader, called to remove the Confederate emblem from the state’s flag, acknowledging that it offends many of the state citizens. But no date has been set by the legislature to discuss the flag’s future in Mississippi.