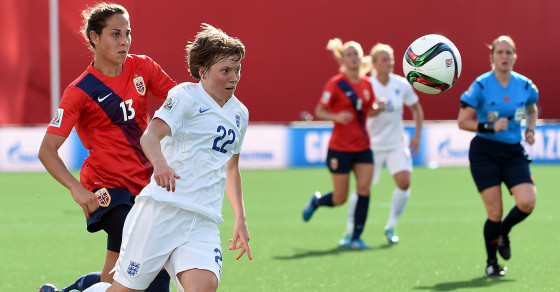 The official Twitter account of England’s male and female soccer teams sparked a backlash on Monday after it announced that its women players would “go back to being mothers, partners and daughters” after returning from the World Cup.

As the U.S. women’s soccer team were being lauded for defeating Japan 5-2 in their first World Cup win since 1999, the account operated by England’s Football Association hastily deleted what appeared to be an unintended throwback to English patriarchal society. “Our #Lionesses go back to being mothers, partners and daughters today, but they have taken on another title—heroes,” it tweeted Monday to more than a million followers.

The poorly conceived message was quickly screen-grabbed and reposted, and within a few hours the #Lionesses hashtag, intended to refer to England’s official symbol, which adorns England’s soccer jerseys, had been hijacked by cries of sexism. It had also sparked a frank and often humorous discussion about negative attitudes towards female athletes and the low value placed upon them by football associations and sponsors.

The tweet was particularly ill-timed considering the largely positive reaction on social media to the U.S. team’s World Cup win in Vancouver. The most-talked-about moments on social were veteran striker Abby Wambach racing to the stands to kiss her wife, former player Sarah Huffman, and Carli Lloyd’s hat trick, including an astonishing 15th-minute goal from the midfield line.

Despite returning to the top of the worldwide soccer rankings, the U.S. women’s soccer team will earn about 40 times less from the World Cup than the men’s team, which rank at number 27.

Our #lionesses go back to being professional footballers today, but the FA will always be a bunch of blundering bellends.

RT @England Our #Lionesses go back to being extras in Star Trek 3 today, but they've earned themselves a speaking part in Corrie.

Has anyone else seen the #Lionesses #sexisttweet? I mean @england are you being serious? May as well sent them this: pic.twitter.com/R0KpwapXhU

Oh @england after our #Lionesses fought so hard, they deserve much better than this! #opentopbusparade pic.twitter.com/CYx8nKoLAU

I mean, some of them don't even have partners. And at least one of them is a person in her own right… #Lionesses pic.twitter.com/qwmp6I6mrP