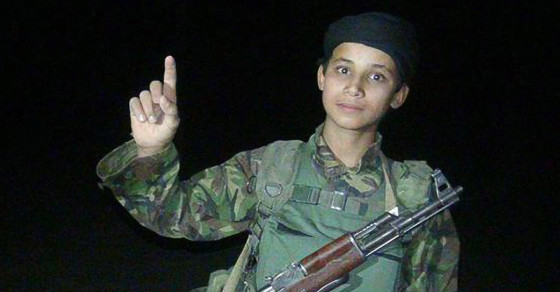 The Islamic State in Syria claimed responsibility for a suicide bombing that was allegedly carried out by a 14-year-old boy, who killed at least 50 Kurdish militiamen in the northern part of the country.

Official ISIS media channels released a picture of the boy, who they identified as Abu Khattab al-Ansari. In the picture, he was wearing a military vest and carrying a Kalashnikov rifle. Online, ISIS’ supporters said the boy was only 14 and that his real name was Omar Hadid al-Muhammadi.

According to an official ISIS statement, the suicide attack was part of a larger offensive against a PKK Kurdish militia located south of Ras al-Ayn, a village on the Syrian-Turkish border.

ISIS is proud of its child soldiers. The terror group has released videos and images of them before, showing teenagers at executions and military training camps for children across Iraq and Syria.

Killed more PKK members than his age. He is 14 years old and killed 50 PKK members. Abu Khattab al-Ansari, the suicide bomber who carried out the attack in Ras al-Ayn.