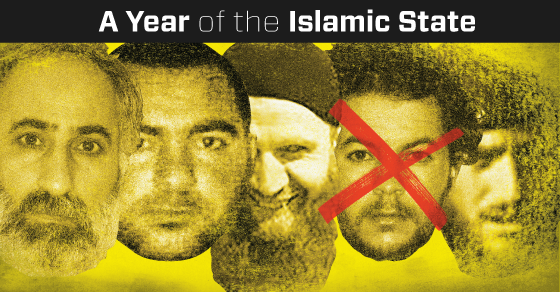 One Of ISIS’ Top Leaders Is Dead
By Jamie Tarabay

One Of ISIS’ Top Leaders Is Dead

One of ISIS’ top leaders, with a $3 million bounty on his head, believed responsible for raising funds, recruiting and equipping incoming fighters has been killed in an airstrike, the Pentagon said.

An airstrike took out Tariq Bin-al-Tahar Bin al Falih al-‘Awni al-Harzi in Syria on June 16, Pentagon spokesman Navy Capt. Jeff Davis, told reporters Thursday. He was killed in Shaddadi, a town in the northeast of the country.

“His death will impact ISIL’s ability to integrate foreign terrorist fighters into the Syrian and Iraqi fight as well as to move people and equipment across the border between Syria andIraq,” said Davis, using another name for ISIS, which is also called the Islamic State.

The Pentagon also confirmed that al-Harzi’s brother, Ali bin Tahar al-‘Awni al-Harzi, believed to have been involved in an attack on a U.S. Consulate in Libya in 2012, was killed in the northern Iraqi city of Mosul a day earlier.

Ali al-Harzi was described as a “person of interest” in the assault in September 2012 on the Benghazi consulate in which four people, including U.S. Ambassador J. Christopher Stevens were killed. Davis told Vocativ that “information was recently released on a separate successful kinetic strike” against Ali al-Harzi.

Tariq al-Harzi had been operating in Syria as an ISIS official since mid 2014. He worked to raise funds, recruit, equip and facilitate incoming fighters for the terrorist organization. He also commanded the group’s suicide bombers and worked with his brother to provide material support to ISIS by procuring and shipping weapons from Libya and Syria, and helps raise funds from Gulf-based donors.