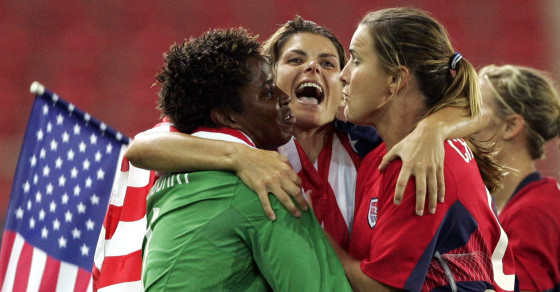 The U.S. women's soccer team benefits from a huge advantage off the field

The success of the U.S. women’s soccer team at the World Cup surely has something to do with the talent of its players, but it’s probably also a function of a secret weapon off the field: The U.S. team has a much bigger staff that works longer hours than those of its competitors in Europe, Asia and the rest of the world.

The U.S. will take on either England or Japan in Sunday’s World Cup final after upsetting Germany 2-0 on Tuesday night. Women’s soccer clubs in both of those countries—and in most other nations for that matter—have much smaller staffs than their North American equivalents.

Ninety-five percent of employees in U.S. women’s soccer clubs work full-time for their respective team, compared with just 47 percent for members of the Confederation of African Football and 46 percent for the Asian Football Confederation. Even members of the Union of European Football Associations (UEFA) fall way behind the U.S., with just 52 percent of staff working full-time. (Canada, which is ranked eighth in the world, matches the U.S. figure.)

There are also more women on the executive committees of clubs in the U.S. and Canada, according to FIFA’s 2014 women’s football survey. Those two countries have double the worldwide average, at 19 percent. And then there’s the stats around women coaches: The U.S. and Canada also have more female coaches, at 21 percent—UEFA has just four percent.

The data shows that the presence of female coaches is highly correlated with a team’s results on the field. The average number of female coaches for associations ranked in the top-20 positions is eight percent, but it’s half that for teams ranking outside the top 20.

Of course, it doesn’t hurt that the U.S. also just has more women soccer players than other places. The U.S. and Canada have registered 2.25 million players, followed by UEFA, with 2.096 million.