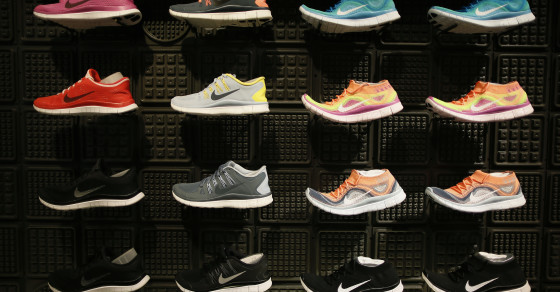 He sold his first pair of sneakers out of his car in 1964. Now he makes billions

Phil Knight started Nike in 1964 with Bob Bowerman, each putting in $500—the company’s revenue is now $30.6 billion. Knight, 77, announced Tuesday he is stepping down as chairman of the company, the end of an era in what is considered to be the world’s most iconic sports brand.

Knight, who sold his first pair of sneakers out of the back of his car, had a huge hand in transforming the brand into what it is today. His influence, not just on the brand but on the shoe industry in general, is best expressed through the shocking statistical transformations throughout his career:

In 1964, only 4 percent of U.S. footwear was imported, but 50 years later, that number was as high as 98 percent. Nike was at the forefront of international outsourcing, helping drive that figure up. Nike has been criticised for its labor practices around the world and was forced to set up auditing systems to try and enhance safety measures in its factories worldwide.

Nike sold that 120 million pairs in 2012. That’s almost one pair of shoes for ever person in Mexico.

Nike operates in 140 countries, with offices in 40. Pretty much wherever there are sports, there is a Nike presence.

The brand knows how to appeal to hardcore sneakerheads. It has re-released the Air Jordan 11, for example, 40 times over nearly 20 years, according to FiveThirtyEight. Someone just bought a pair for $30,000 on eBay in April.

How Phil Knight Turned The Nike Brand Into A Global Powerhouse (Quartz)
Adidas Vs. Nike: Who’s Winning The Hearts And Minds Of NBA Fans? (Vocativ)