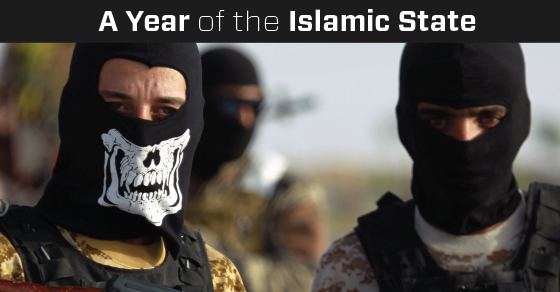 Get Used To The Islamic State
By Jamie Tarabay

Get Used To The Islamic State

Even if the US military were to join the fight on the ground against ISIS and beat it back, the group won't be eradicated any time soon 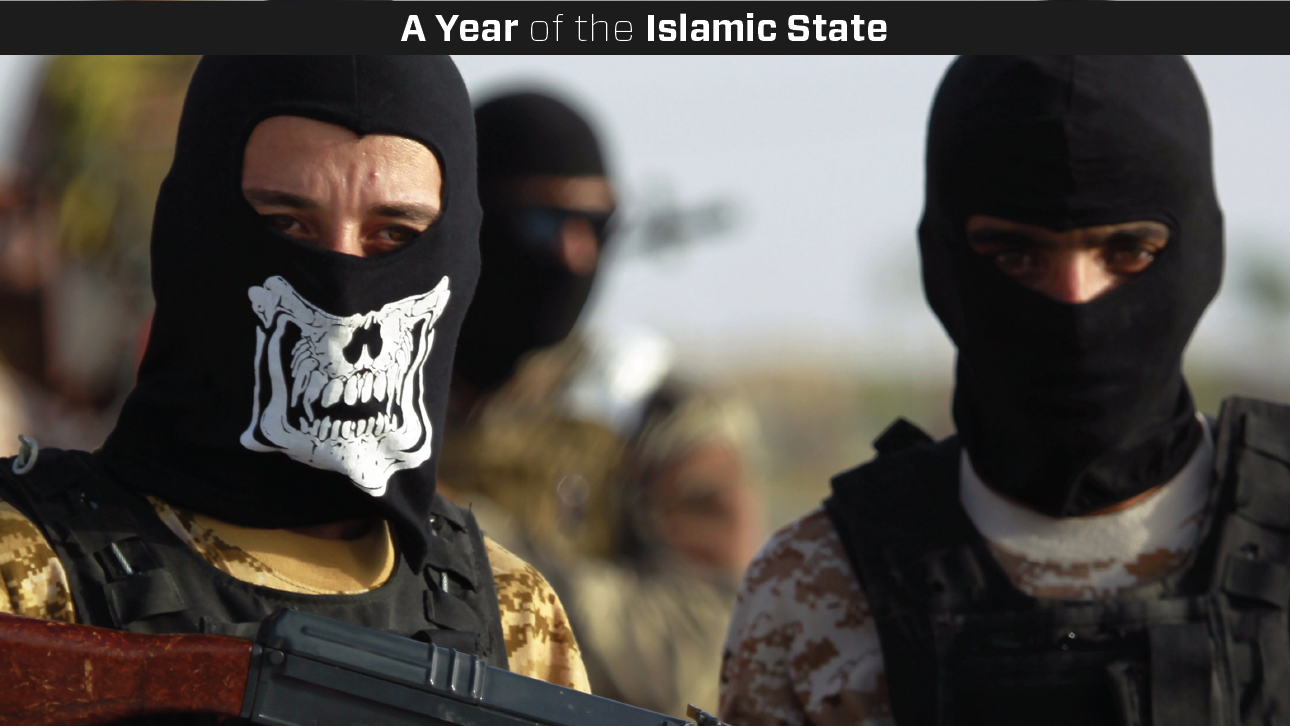 Diyala, in Iraq’s northeast, shares a 130-mile border with Iran. The bounty yielded from the land, nurtured by its two rivers, made agriculture its main industry. It’s been called the breadbasket of Iraq and the orange capital of the Middle East.

And long before most people had ever heard of the Islamic State, it was the first place to be declared its capital.

“We saw all of those graffiti on the walls saying ‘Islamic State of Iraq,’ videos of beheadings of Iraqi security forces,” said (ret.) Col. David Sutherland. “We found weapons caches, ledgers, we found Wahhabists and Sharia law courts.”

This was Iraq in 2007, when Sutherland commanded 5,000 U.S. troops in the Third Brigade Combat Team of the First Cavalry Division in Diyala Province. “People have to understand, this didn’t just stand up,” he told Vocativ recently. “It’s not something new.”

What Sutherland saw in Iraq in 2007 is a harbinger now, on the one-year anniversary of the day ISIS declared itself a new caliphate. The U.S. military could easily dispatch ISIS as a fighting force were it to return to Iraq, but the victory would be short-lived, as Gen. Martin Dempsey, the chairman of the joint chiefs of staff, told Congress recently. “We’d be back there two years from now,” he said.

The bitter reality is that ISIS is part of the fabric of Iraq, first drawn from it and now woven into it, making it impossible to unravel.

Its full name may be the Islamic State of Iraq and Syria, and it now has affiliates throughout the Middle East and northern Africa, but ISIS is largely an Iraqi organization, and those who have benefitted from its victories the most are primarily its Iraqi leaders. (Complaints from foreign fighters who’ve abandoned the group suggest that ‘the Arabs’ receive the spoils of war, including sex slaves and mansions, while foreigners are primarily cannon fodder, sent in as suicide bombers in military assaults.)

The Iraqis who lead ISIS are largely pulled from the former Iraqi army that served Saddam Hussein and was unilaterally fired by U.S. Ambassador L. Paul Bremer in 2003. Many met while in U.S. military detention. Their experience working within the autocratic infrastructure under Saddam means they have the ability to organize, plan, and function as well as any bureaucracy, and they have the hometown advantage.

When Sutherland oversaw U.S. troops in Diyala in 2007, the Islamic State of Iraq was led by Abu Omar al-Baghdadi, and it was comprised of a number of Baathist and zealous Islamist militant networks. They’d railed against the Shiite takeover of every aspect of Iraqi government structure and the exclusion of Sunnis. It was clear from the sectarian tinge that accompanied most every political move during those years that the Sunnis, so long the beneficiaries of Saddam’s generosity, were out. Those former regime officers and foot soldiers had no place in the new Iraq, and turned to insurgency.

When those groups consolidated under one banner then, it was mostly a marriage of convenience, favoring the ability to work together to disrupt progress with spectacular attacks that killed dozens at once, hammering at the central government’s ability to maintain order.

When Sunni leaders in Anbar province chose in 2007 and 2008 to give up attacking U.S. troops in return for arms, funds and the possibility of greater political representation in Baghdad, ISI went underground. The U.S. military was finally able to subdue whatever Sunni resistance remained, allowing for the drawdown and eventual withdrawal of all U.S. troops.

But the failures of the government in Baghdad to consolidate security gains and accommodate the country’s Kurds and Sunnis allowed the Islamic State to re-emerge, this time even stronger than before. An ineffective Iraqi army, largely dominated by Shiite forces, held little sway in primarily Sunni areas such as Mosul and Diyala. In many ways their alienating the locals eased ISIS’s conquest of both those areas and their people. Now with Abu Bakr al-Baghdadi at its head, ISIS is taking on all the trappings of an actual state, complete with its own healthcare system, currency and communications network. And it will be very hard to uproot now.

That is only one part of the dilemma facing the White House in its strategy to defeat ISIS, one that President Barack Obama admitted earlier this month was far from complete.

The go-to solution for many Republicans has been to arm the Sunnis. From a marine vet lawmaker to presidential candidates, the notion that arming Sunnis displaced and disenfranchised by ISIS as well as the Baghdad government would work as a strategy has become almost a clarion call. But that will to equip the Sunnis is felt strongest in Washington, far from Anbar province. It was something President Obama mentioned when he spoke in Germany of the need for a strategy.

“One of the things that we’re seeing in Iraq is that we’ve got more training capacity than we have recruits,” Obama said. “A big part of the answer there is outreach to Sunni tribes … (which) … has not been happening as fast as it needs to.”

That is not happening for many reasons. Even as Obama spoke, Vocativ reported on Sunni tribal leaders in the towns ISIS had recently conquered pledging allegiance to their new overlords. The ties that bind ISIS to the Sunnis run deeper than mere nationality and sect too. Marriages are made. Boys are recruited as young soldiers. Tribal customs adhered to. Whether under duress or not, the men leading the tribes that have been neglected by Baghdad for so long had little choice once the Iraqi security forces left the western city of Ramadi and its people to the mercy of ISIS.

But this should come as no surprise. Ramadi had been in the middle of ISIS’ crosshairs for more than a year; the group had launched attacks on the city and destabilized security there so much that Baghdad opened only a handful of polling centers, denying many of Ramadi’s residents the opportunity to vote in the national elections last January. The city’s occupation by militants was largely ignored by Baghdad until only recently, after Prime Minister Nouri al-Maliki was voted out of office and his successor Haider al-Abadi appointed. Abadi has much ground to recoup as he tries to win back the Sunnis. Even as he attempts to do so, the recent flight of tens of thousands of Sunnis out of Ramadi and the sight of them left stranded on the outskirts of the capital is only exacerbating sectarian tensions. The subsequent refusal by authorities to give many of them refuge has further embittered both sects and will only add to the years it will take for the two to truly reconcile.

“The Sunnis have every reason to believe the Iraqi government is not the place to place their chips,” said Janine Davidson, a senior fellow at the Council of Foreign Relations. “They will either be in the background, or supporting ISIS.”

The U.S. knows this, which is why the U.S. military has resisted sending more troops than it has already. It cannot once again send its young officers to become diplomats and politicians, courting tribal leaders to lay down weapons and align with the U.S. military. This is something, as the Pentagon has stressed, that the Iraqis must do themselves. After the so-called Sunni Awakening of 2007, the Sunni tribes discovered that the pacts they’d drawn with the U.S. military didn’t hold water with Baghdad. And neither the U.S. nor the tribal sheikhs are willing to re-tread familiar ground that yielded only disappointment in the past.

Whatever progress Abadi plans to make, he must do it quickly, before he endures any more losses on the battlefield and in parliament. Deputy Secretary of State Anthony Blinken spoke last week about Abadi’s “vision of what we call ‘functioning federalism,’ which basically means empowering local communities to make their own decisions.” His intent to allow the provinces to assume more control and administration may go some way towards tamping tensions. But he is still beholden to Shiite factions in parliament who do not trust the Sunnis to turn whatever weapons they have on them. Nor do they particularly wish to see an even more emboldened Kurdish autonomy flourish.

“I think Abadi understands the need for the political outreach and the essence of their grievances,” Robert Ford, the former U.S. ambassador to Syria and now a senior fellow at the Middle East Institute. “But I think Abadi operates as part of a broad Shiite coalition who take a very hard line against the Sunnis, and view them as sympathetic to the Islamic State, and are therefore not inclined to reach out.”

Ford says that as well as having to convince his own political allies, Abadi needs to have reliable Sunni partners in the capital “I’m not sure (the Sunni leaders) are able to convince many of the people, to prevent their sons and brothers from joining the ranks of ISIS,” he said. “The credibility of some of the leaders in Baghdad is not so great as to be able to sway.”

The tens of thousands of U.S. troops who flooded Baghdad to stem the tide of sectarian killings in Iraq in 2007 were primarily there to stabilize the security situation enough to allow the politicians to work. Even with the space they currently have to dedicate legislation to ameliorating national tensions, Iraq’s politicians are in no rush. Parliament in Baghdad isn’t even in session and won’t meet again until July.

The political distrust and the excruciatingly slow pace of progress only gives more time for ISIS to settle into its territory more convincingly. The group recently chastised Sunnis who left Ramadi when it fell, even as it continues to show no mercy to citizens whose loyalty it doubts. Sunnis who live within the confines of the Islamic State have watched Shiite militias overrun Tikrit, rampaging and looting and killing at will. They know that Iranian-backed forces and a general from Tehran stand on the front lines alongside the Iraqi army that is meant to be their protector. They have already been disappointed by empty promises from Baghdad about greater representation, better social services, including electricity and water.

They will be reluctant to throw off ISIS, which along with its punitive side is intent on pursuing the functions of a welfare state.

“It’s a frustration among Americans that we can’t fix the Iraq problem, fundamentally the Iraqis have to fix their own problem,” said Robert Ford. “The real issue is not whether we have 10,000 or 150,000 of five American troops on the ground. The issue is will the Iraqis rally behind this government in Baghdad to rally against ISIS.”

As long as the Sunnis remain unconvinced of the central government’s will to truly help them, they may choose to remain under ISIS. And that is why the U.S. military knows that any quick win in battle won’t mean a real victory in this war. Even if it were to be defeated, just as last time, as long as there is no real change in Baghdad, the Islamic State would again find a place to set down roots among its own people and the disenfranchised.