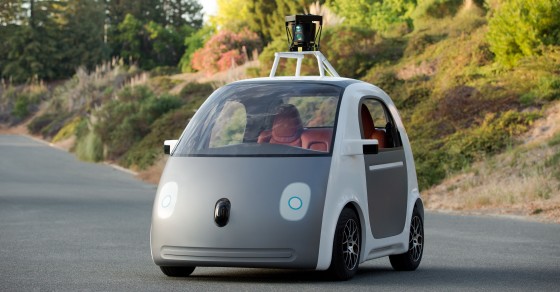 Google’s self-driving car was apparently spotted on public roads for the first time since the company’s May announcement that it would be conducting tests of the prototype vehicle during the summer.

A tweet with a picture of the car was posted by Tynker CEO Krishna Vedati indicating that he spotted the vehicle shortly before 2 a.m. local time in Mountain View, California, on Wednesday.

Google's new self driving car without a steering wheel in action this AM in mountain view at 1 40 AM pic.twitter.com/FkpClllbMR

Vedati’s image is too blurry to discern whether the car was being controlled by a person or if it was cruising in its autonomous mode. He did indicate in his tweet that the car appeared to be moving “without a steering wheel in action.” This is the first reported occurrence of the highly-anticipated self-driving car moving about outside of its testing grounds.

Google announced in a May blog post that each vehicle’s speed would be limited to 25 mph, with safety drivers controlling the car through a removable steering wheel, and gas and brake pedals. The post also indicated that a few prototype vehicles will “leave the test track and hit the familiar roads of Mountain View, Calif.” this summer.

Social media is filled with pictures of Google’s other self-driving cars, a white Lexus RX SUV and Toyota Prius, which it uses to test equipment. But no evidence of the newer vehicle being publicly tested have surfaced until now.

The California DMV recently released the details of six accidents which involved Google’s self-driving cars on public roads. The vehicles involved however, were previous models, and the newer prototypes were not implicated.