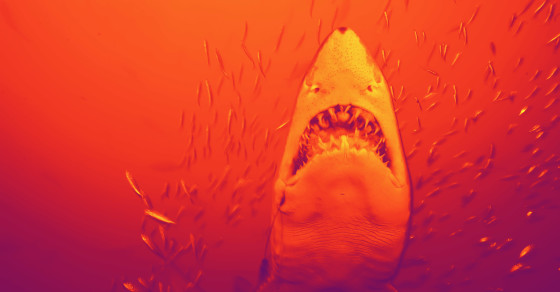 Beaches are typically quietest during midweek, but that doesn't stop the tiger shark

Wednesday is hump day, and as we’re officially in high summer, you may be thinking of packing it all in to head for the beach, but heed this warning: Tiger sharks are most likely to attack you today.

A Vocativ analysis of 864 U.S. shark attacks for the last 100 years reveals that the biggest man-eaters—such as the great white and blacktip shark—usually attack on Saturdays, when the largest throng of beach goers invade their territory for a refreshing dip. But tiger sharks, which can reach 16ft and are known as “garbage eaters”, attack most of their victims on a Wednesday.

The tiger shark has attacked 97 Americans since 1900—that’s almost 20 percent of all U.S. shark victims. The species has killed at least nine people, including as recently as August 2013, when 20-year-old German tourist Jana Lutteropp died in Maui, Hawaii after a tiger shark ate her arm during an afternoon snorkeling session. Lutteropp was one of just two women killed by the creature since 1900, as seven were male.

Non-fatal attacks are more frequent, but no less grisly: In March, 58-year-old Ken Grasing fought back after a tiger shark bit into his hand, also in Hawaii. The location is a trend: Almost every U.S. tiger shark attack has taken place in Hawaii, save a few others in Florida, North Carolina, Louisiana, California and Puerto Rico.

Great white sharks remain the biggest killers, having claimed the lives of at least 20 humans in the U.S., 18 of whom were men, such as Francisco Javier Solorio Jr, a 39-year-old surfer who died in California in 2012 after being maimed by a 15ft to 16ft great white. Unlike tiger sharks, great whites are most likely to stage an attack on a weekend.

U.S. Shark Attacks By Day Of The Week