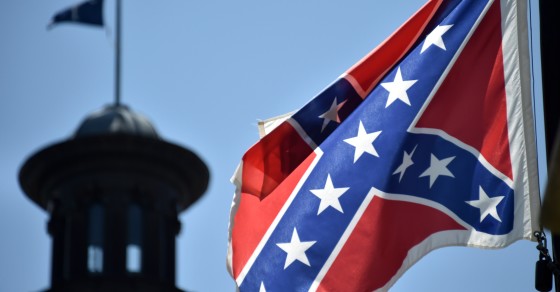 Amazon’s Best-Selling Confederate Flag Was Made In Taiwan

The hot item from Amazon boasts a four-star rating, but a closer look of the product reviews shows a mix of sentiments about the flag

Amazon.com is about to join the ranks of Walmart and eBay by pulling its Confederate product lineup from the site. But before the rebel flag disappears for good, fans of the Confederacy can still stock up on their favorite items from the popular online retailer.

Over 29,000 results showed up in a query for “Confederate flags” on Amazon as of Tuesday afternoon, and the site’s bestseller was a 3-feet-by-5-feet printed polyester flag that was made in Taiwan.

Last week’s church shooting in Charleston, South Carolina, touched off a national debate over the Confederate flag after it was reported that suspected shooter Dylann Roof appeared in photos waving one.

The Taiwanese-made flag on Amazon boasts a four-star rating, but a closer look at the product reviews reveals a mix of sentiments.

“Poor quality, won’t flush,” wrote Rufus Strangeways, who gave the flag a two-star review. “I was disappointed with the quality of this item. It felt rough and wouldn’t flush properly.”

Some reviewers used the section as an opportunity to educate the shopping masses about the flag’s rich history.

“The cross is a symbol of violence death and destruction not only by the nut jobs that flew the confederate flag the past 140 years but countless numbers of war mongering, violence loving, hate draped nut jobs around the world for over 2,000 years,” said one reviewer who went by the name “hoo.” (This shopper gave the flag a five-star review, apparently ironically.)

Others were more somber.

“As a Mississippian, this flag is a disgrace. It displays nothing but pride in a (failed) treasonous attempt by my southern part of the country to leave the United States,” said Disgusting Display of Hatred. “It was used by the Confederates during the Civil War as southerners fought their fellow countrymen for ownership of slaves.”

More Which States Love The Confederate Flag The Most?

At least one shopper appreciated the irony that the beloved flag of the South was made in another country.

“The real irony is that this symbol of the oppression of the black man and woman is made in China by people who are oppressed by their government, all to in turn sell it to intellectually repressed bigots,” wrote a shopper named “Value Hunter.”

An Amazon spokesperson on Tuesday confirmed that the retailer is taking down its Confederate flag merchandise. As of Tuesday afternoon, Confederate items started disappearing from the site.