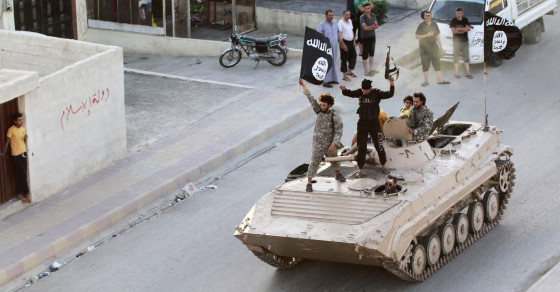 ISIS Spokesman Calls On Sunnis To Become Martyrs During Ramadan

Telling followers that those ‘martyred’ during the Muslim holy month of Ramadan receive even greater blessings than those who die during other times of the year, ISIS spokesman Abu Muhammad al-Adnani called on supporters to launch attacks Christians, Shiites and Sunnis fighting against them in a new audio recording released Tuesday.

Adnani, the official spokesman for the group, welcomed the recent pledges of allegiance in the new message, calling out fighters in the Caucasus and elsewhere who announced their loyalty to ISIS and its leader Abu Bakr al-Baghdadi.

“Muslims everywhere, we congratulate you over the arrival of the holy month,” Adnani said. “Be keen to conquer in this holy month and to become exposed to martyrdom.” Heavenly rewards for marytrdom during Ramadan would be paid ‘tenfold,’ he said.

Adnani claimed ISIS was unafraid of the regular air strikes visited on its bases in Iraq and Syria by members of the international coalition.

“We will continue, God willing, in our path and will not care even if many nations gang up against us or how many swords we are struck by,” he said, also attacking President Barack Obama in his 20-minute plus message.

“Obama and your defeated army, we promise you in the future setback after setback and surprise after surprise,” he said.

Adnani called on Sunnis to return to the lands ISIS now controls, even as ISIS continues to show no mercy towards citizens whose loyalty fighters doubt. As Adnani’s Ramadan message was disseminated, ISIS’s official media network also released a video showing the execution of 16 men.

Purportedly filmed in Mosul, some of the men were drowned after being locked in a cage that was lowered into water. Others were confined to a car that was then hit by an RPG. In the year since declaring its Islamic caliphate, ISIS has portrayed both a benevolent, charitable side, alongside a merciless, punitive entity.