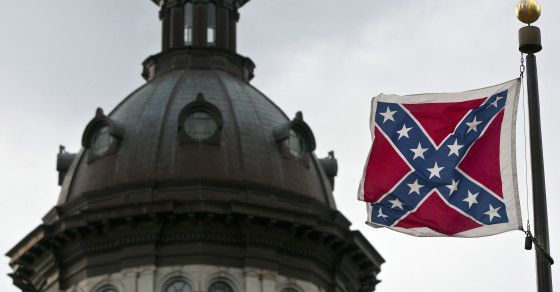 Some People Are Furious Walmart Is Pulling Confederate Products

#BoycottWalmart, a hashtag previously used to protest the wages Walmart pays its workers, became a movement to protest the retail chain’s removal of all Confederate flags and related merchandise from its retail stores and online.

After Walmart announced Monday it would stop selling Confederate-themed merchandise, hundreds of tweets using #BoycottWalmart flooded social media. Just a few days before, #BoycottWalmart had been used primarily to comment on income inequality within the corporation. But on Monday, when there were 339 tweets containing the hashtag, the majority of them were about Confederate products and came from people opposing the move and accusing Walmart of censorship.

Controversy over the Confederate flag’s presence in American society exploded after images showing Dylann Roof—the suspect in the shooting deaths of nine people in a historic black church in Charleston, South Carolina—posing with the flag were revealed online. A Confederate flag flies in front of South Carolina’s State House. South Carolina Gov. Nikki Haley said Monday afternoon that she supports its removal.

The evolution of #BoycottWalmart symbolizes the tension surrounding two topics that have become hot-button issues in American politics—income inequality and racism.

What was once a labor activism tactic:

Is now being used as a pro-Confederate and anti-censorship protest slogan:

WalMart you are off my shelf #boycottwalmart Wal-Mart how ridiculous blaming a flag for some retard killing people https://t.co/KCSvZTXkpa