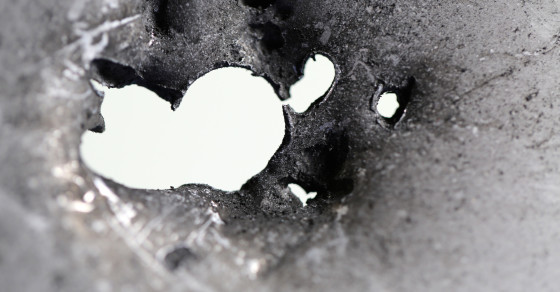 Space Debris Could Punch A Hole In The Space Station
By Joshua A. Krisch

Space Debris Could Punch A Hole In The Space Station

The European Space Agency wants to tidy up Earth’s orbit—and not a moment too soon. Scientists estimate that roughly 23,000 bits of junk have been left in space in the process of launching nearly 6,600 satellites into orbit over the past 50 years. Space debris poses a very real threat to satellites and astronauts (not exactly as it happened in the movie Gravity, but close.)

More Here Are The “Big Three” Disaster Scenarios In Space
​

In a recent report, the ESA demonstrated that space debris the size of a grain of sand, if travelling fast enough, can blast a massive hole in an aluminum plate. In low Earth orbit, says the ESA, those 23,000 bits and pieces of old satellites whiz past astronauts and satellites even faster—often at 10 to 20 times the speed of a bullet.

The International Space Station has a few creative ways of dodging space junk. In a pinch, astronauts can coordinate the eight engines of the unmanned Progress supply ships that are docked at ISS to fire simultaneously, pushing the entire space station out of harm’s way. But in the next few years, ESA hopes to tackle the problem at its roots and actually begin removing junk from orbit.